I had a great time taking photos at the first annual Nipmuck South Trail Race in northeastern Connecticut today. This 14-mile beauty winds up and back along the Fenton River just east of UCONN. It was hot and humid, but well-shaded much of the way (not that you'd know that from my photos, where I mostly deliberately sought the better light of more open areas). I encountered a few patches of poison ivy leaning into the trail along my several mile walk, and tried to warn runners just before they got to it (most were appreciative, except the guy who replied back to me "don't get it; don't care!"). The mosquitoes took their fill from me whenever the breeze died down, but honestly it really wasn't that bad. I've experienced WAY worse this time of year in New England. Congratulations to all the runners who came out for this inaugural race; it definitely looks like one to save the date for in 2014! Here's a quick sampling of the photos: 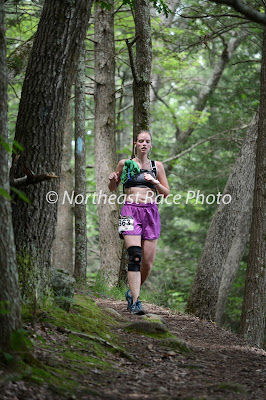 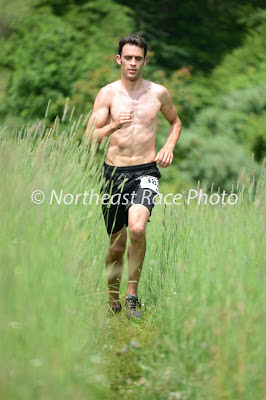 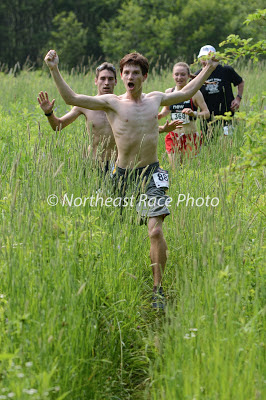 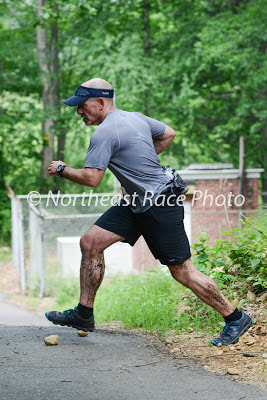 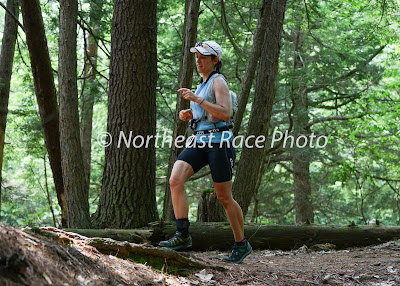 
and the full gallery will be posted at Ben Kimball Photography in a few days
Posted by Ben Kimball at 6:32 PM No comments:

After hopping across the river to take photos of a local 5K cross-country race (the annual School's Done! Raider Run in Westhampton, MA) (full gallery here), I came back and plopped myself down in a beach chair out in front of Hampshire College to take photos of the 2013 New England Relay.

The relay starts in western Rhode Island and continues for 225 miles, winding through New England and ending in southern Maine, making sure to touch all six states at some point. Teams of twelve (or sometimes six, for the hardcore) tag-team along the route using passenger vans, with each person running a total of 3 (or 6) legs. The exchange between legs 8 and 9 occurred about 3 miles from where I live, along Rte. 116 at Hampshire College just south of Amherst.

This was one of the most relaxed photo shoots I've ever done and it was so enjoyable. Just kicking back in the breeze in my beach chair (trying to rest my sprained ankle) on a nice warm afternoon, rising every ten minutes or so to take action photos of fit athletes looking cool. Not a bad way to spend a day! 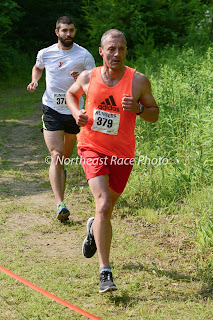 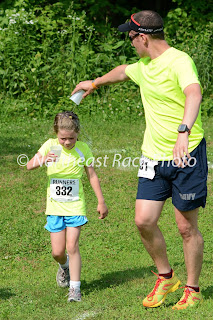 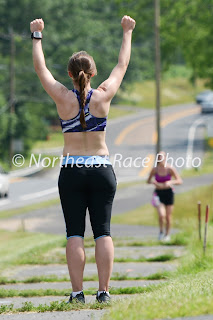 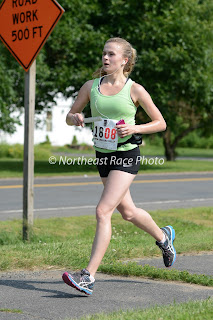 Posted by Ben Kimball at 3:45 PM No comments:

brewery to brewery ride, and a sprained ankle

I drove up to Chesterfield, NH today to photograph riders as they came through miles 98/99 of the 2013 Harpoon Brewery to Brewery Ride. This was work I did for a client (Destination Cycling), so I don't have a gallery of my own at Northeast Race Photo this time. The photos are in an album here [link removed], mixed in with shots by other photographers stationed at the start and finish. I took shots both at the scenic, pastoral spot near the top of the climb at mile 98 and at the aid station at mile 99 in the center of the village. I'm so pleased with how these shots came out.

My other story for the day is that I appear to have sprained my ankle. I arrived early to Chesterfield so I decided to go take a short scouting run on trails in Pisgah before the first riders came through. I wanted to see a section of trail on the Pisgah 50K course that I hadn't been on yet. So there I was, looking around and wondering if I'd missed a turn and thinking about doing my first ultra and BAM... rolled that left ankle out and OUCH! So stupid. Looks like a good week of weights and swimming ahead for me. 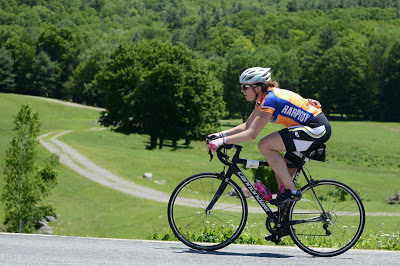 Raced the Hollis Fast 5K in New Hampshire for the first time tonight. The course drops several hundred feet over three miles but still qualifies as an officially sanctioned 5K distance. I was hoping for a PR, but came up just short. I was well-trained... for a longer race. My weekly mileage has been in the high 30's lately, and I've brought my weight down to the low 170's, but I've only done a few track workouts, and short ones at that. So although the conditions were perfect at race time (temps in the high 50's with a light rain) I still only ran my third or fourth fastest 5K, a 19:33. 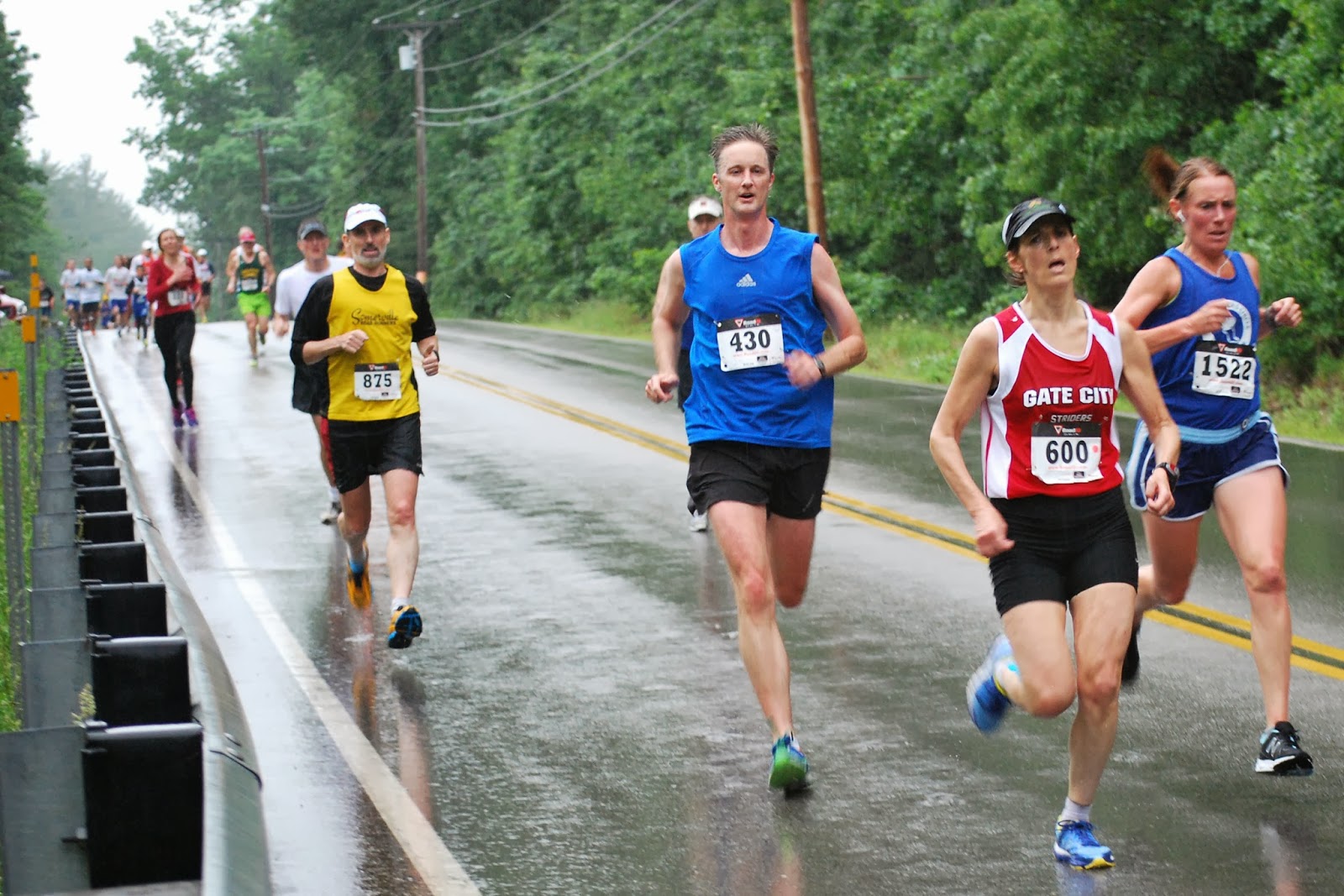 just before the finish of the 2013 Hollis Fast 5K

I enjoyed the race and am glad I did it and certainly would recommend it, but to be honest I'm not sure I'll do it again. The field was huge (it was a New England Grand Prix event this year) and the traffic was pretty heavy. And unless you do a 3-mile warmup from the finish, you have to take a bus to the start. All of which means it's quite a production for a short Thursday evening race.

Took pictures as the official photographer of the 2013 Westfield Wave Triathlon (a local sprint tri) today. Not much more to say, really. The shoot went really well and I got some good shots! Full gallery posted here at Northeast Race Photo. 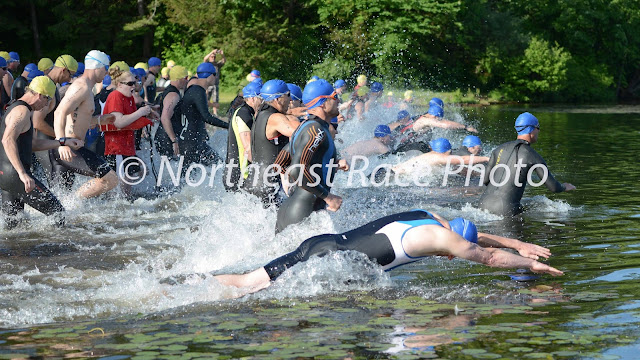 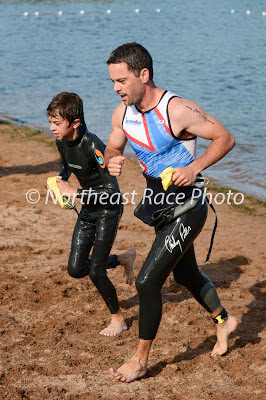 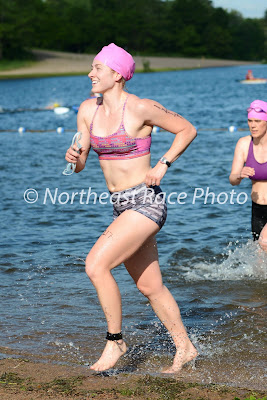 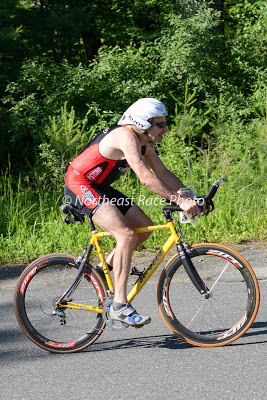 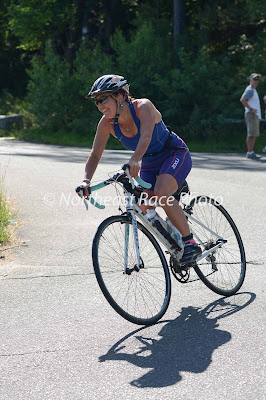 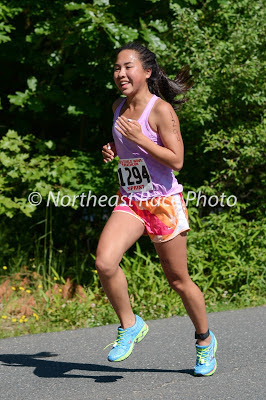 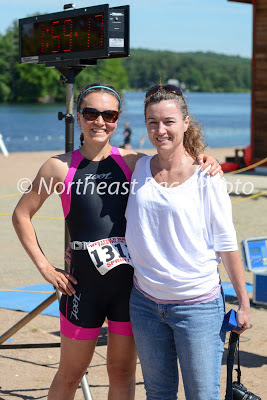 I took photos at a spectacular trail running event this morning, the West Windsor Forest 5 and Dime 5K and 10K trail races at Mt. Ascutney in Vermont. The course looked so awesome, with a tremendous variety of footing and scenery, including a terrific waterfall about halfway along. Here's a brief sampling: 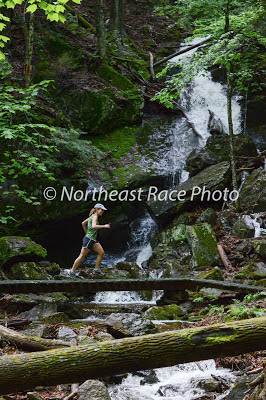 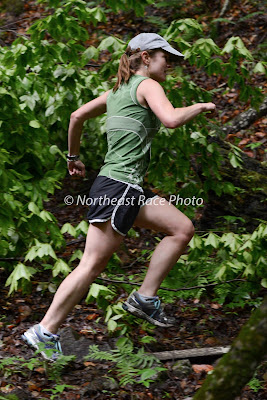 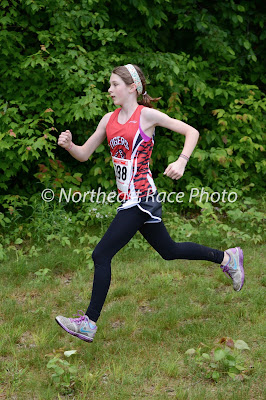 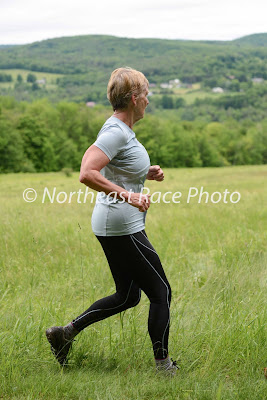 The full gallery is posted here at Northeast Race Photo

On Saturday I arrived at Riverside Farm in Pittsfield, VT just in time to catch the start of the Peak Ultra 50 and 100 mile races. I'd left Amherst around 3:30 to make the 6AM start time; with no traffic and clear weather, I gotta say it was an extremely pleasant drive all the way up I-91, VT 103, and Route 100.

These races are truly insane. In the best way, I mean. The course is extremely difficult. It crosses rivers, follows muddy snowmobile trails, and relentlessly ascends and descends various peaks of the Green Mountains. The winner of the 50-mile race said she measured something like 12,000 feet of climbing. Imagine hiking a 4,000 footer, then do it three times, running, and make your total mileage for the day = 50. Two other events were occurring at the same time as the 50 and the 30: a 200-mile race that had started two days earlier (I was later told that everyone had dropped from that one) and a 500-mile event that had started a week ago (one man was in the mid-400's and one woman was somewhere in the 300's).

After shooting the start I talked for a while with Brian, the videographer from New York, who kindly shared with me the location of the river crossing. It was only a few miles north, so we had to hurry. I ended up getting many of my favorite shots of the day there, and am so thankful for the tip. Once the last runners had come up from the river and crossed Route 100 to Amee Farm Lodge (I think; there was some mention of several who had overshot the river crossing and started climbing the 10-mile loop of the 100-mile course), around 7AM, it was off to the general store for coffee and a quick breakfast sandwich. 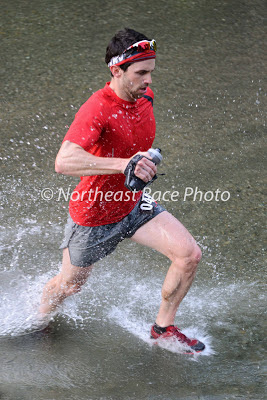 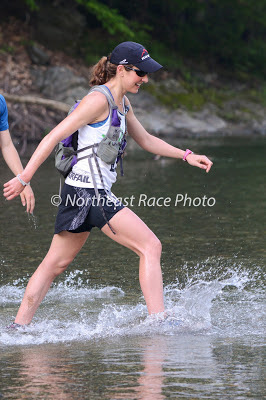 The 30-mile race (it says something that the 30-mile race is regarded as the "fun run" of this day) started at the end of the passable part (for regular cars) of Upper Michigan Road. I'd meant to shoot that as well but decided to stay at a sunny spot a few miles farther down to catch the majority of 50-milers again as they came out from their first major mountain section. From then on it was all a bit chaotic as I tried to ascertain course routes and logistics.

I ended up hiking a few miles up the Bloodroot loop until I got to the height of land west of Thousand Acre Hill that also happened to be the end of the road even for high-clearance vehicles. I'd only seen a couple of runners that whole stretch, all from the 50-mile race (my apologies to the woman who sounded notably unthrilled to see the photographer yet again). Anyway, it was there that I met a guy who was there to cheer on his wife in the 30-mile race, along with two of their friends who were up from Baltimore. These were good peeps, and I laughed at just about everything that came out of the Baltimore guy's mouth. Anyway, I finally figured out that I had missed the 30-milers completely due to some erroneous intel I'd received about which loop they took and when. And it turned out that these guys had missed them too, and would have to race down to the mile 31 aid station (they had to drive all the way south to Killington and then back up towards Chittenden) to catch her. On their way back out this group kindly gave me a lift back to the Upper Michigan Aid Station (thanks again, guys!), which was mile 37 for the 50-milers and mile 17 for the 30-milers. 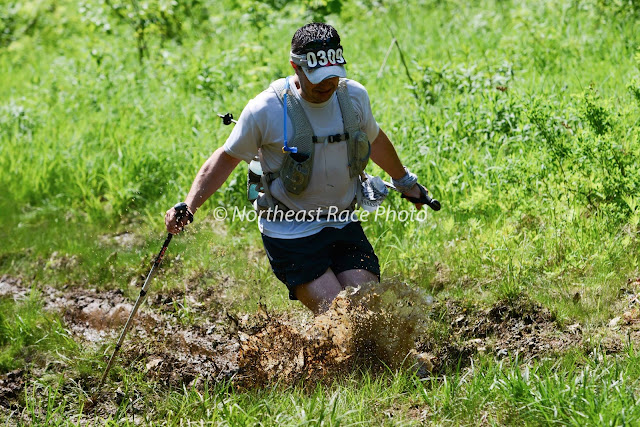 Heading back out on the Bloodroot loop, I hiked in the OTHER direction, hoping to catch the lead runners of each race as they made their way back to the Upper Michigan Aid Station. This seemed like a good idea in theory, but in practice I ended up not seeing a soul for another hour, at which point I'd crossed the river and hiked up over a thousand feet to where the trail passed over a ridge of an unnamed peak. And by that point everyone was so spread out that I'd only see an average of one runner every 20 minutes or so. If that. So I turned back, catching a few photos here and there, and just getting back as the nasty sounding thunderstorms (that never really did much of anything) loomed threatening in the afternoon sky.

After this I went down to the finish and took a few more shots along the 10-mile loop, finally calling it a day at 6PM. On the drive home I stopped to jump in a pond and wash the day's sweat, grime, and bug bite blood off. Of course I'd stop to jump in a pond anyday anytime anywhere anyway, but it surely felt good nonetheless.

6/4: The full photo gallery is now up at Northeast Race Photo; and there's a preview album posted on the Facebook page. 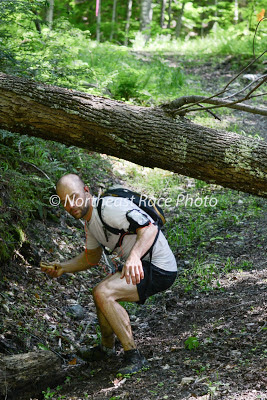 Posted by Ben Kimball at 6:57 PM No comments: