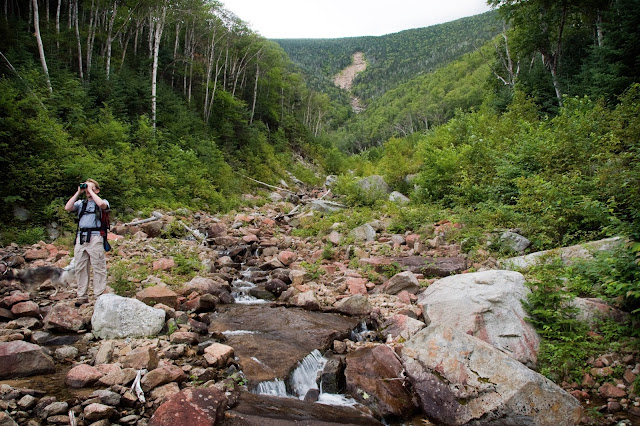 Since last winter, my friend Pete and I had been ogling the aerial photos of this valley on the north side of North Twin Mountain in New Hampshire’s White Mountains. The valley is essentially hidden, tucked away from most views by a curving north ridge, and lacking a trail or any signs of previous logging operations (recent ones, anyway). The only place you really can see the slide, or at least the upper part of it, is from the village of Twin Mountain, where you can catch a hint of the hidden.


Part of the appeal was this long scar of open rock that, in the aerial photos, stands out like a beacon among the surrounding dark green forest. The photo above was taken after a mile-long bushwhack from the first stream crossing along the North Twin Trail. We discovered that the scar is not permanent, but rather a result of a huge landslide that must have swept down the stream valley from the higher slopes of the mountain, maybe after a really heavy rain. You can still see the open slide above. The sides were re-vegetating with alder and birch thickets, but we were able to easily walk right up the stream course to the head of the valley.

Our lunch rock was at the bottom of the steep part. From there, we veered to the left of what you can see here and climbed about 500 feet up an open rock slab. The slabs were steep and wet, and just past the edge of our comfort zone. It was pretty exhilarating. I didn't take any photos between the lunch rock and the top of the open slabs because the camera was buried deep in my pack. The slick ledges were right on the verge of being anything we felt safe freeclimbing, and they had soggy lichens too. I really wish I had shots that conveyed how sloped it was, because the photo below only shows the top part, and it was definitely steeper than that. The dog, of course, thought we were major wussies.

Then we bushwhacked through very steep and dense high-elevation spruce and fir forest towards the top. I'm not gonna lie to you; this part took a while. For every stretch of semi-open, mossy understory there was a corresponding dog-hair thicket of gnarly, interlocking spruce trees. Eventually we reached the trail along the crest of the northeast ridge. From there it was an easy walk to the top of the mountain (4,760 ft.), where there were spectacular views from several open ledges. At the end of the day we descended via the North Twin Trail back down to the trailhead. 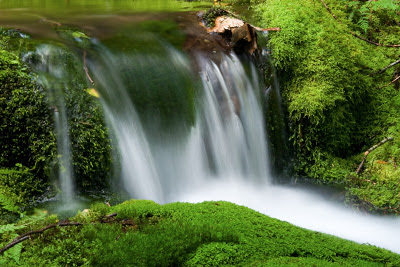 pretty little falls on the bushwhack up to the slide 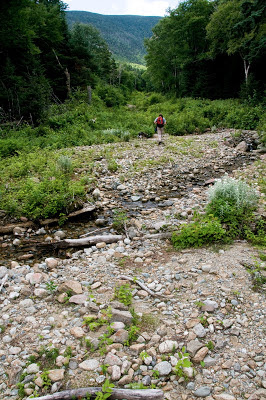 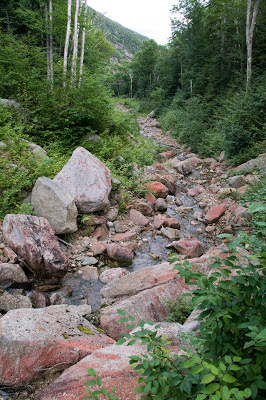 lowest parts of the slide 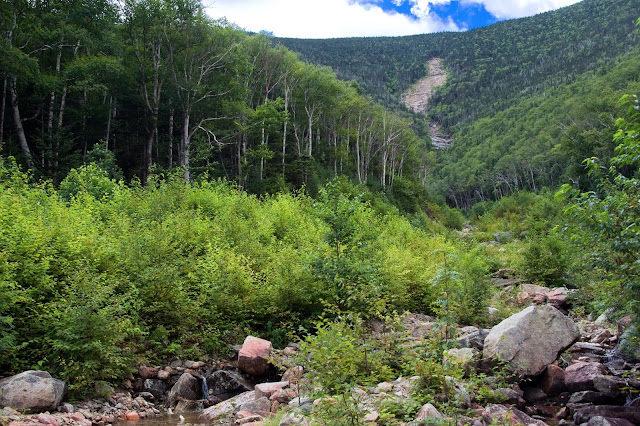 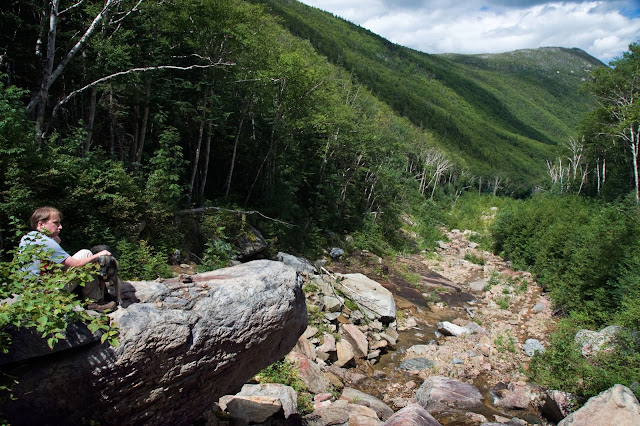 lunching in the hidden valley 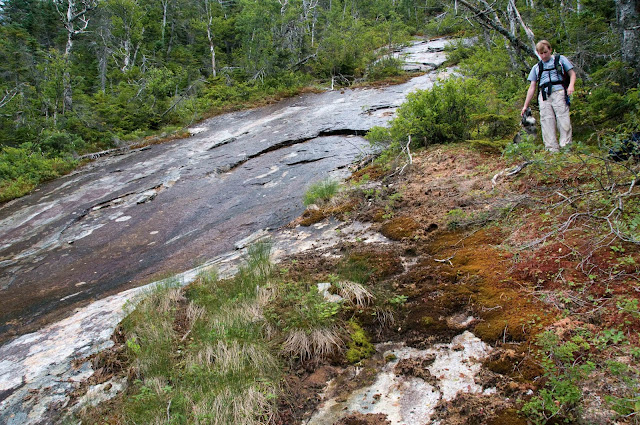 boggy fringe at the top of the left slide 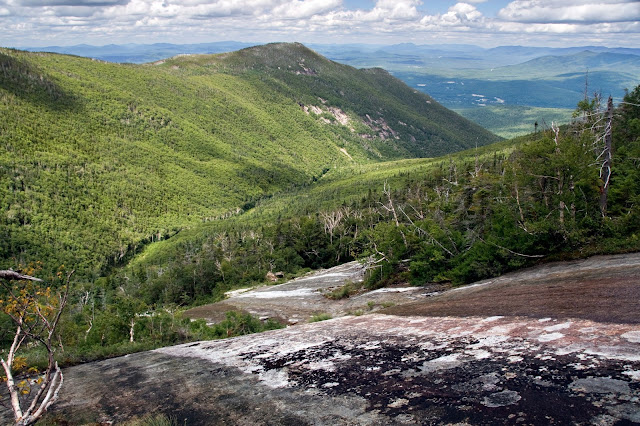 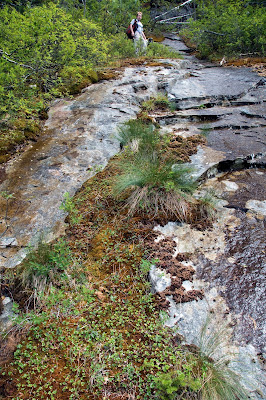 one last little pitch in the open... 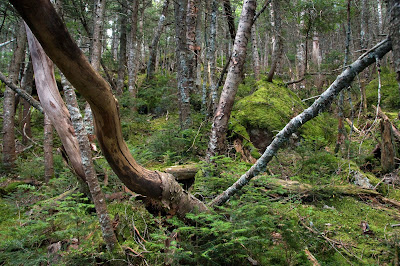 ...before the last quarter mile or so of ascent
through steep, rugged spruce-fir forest 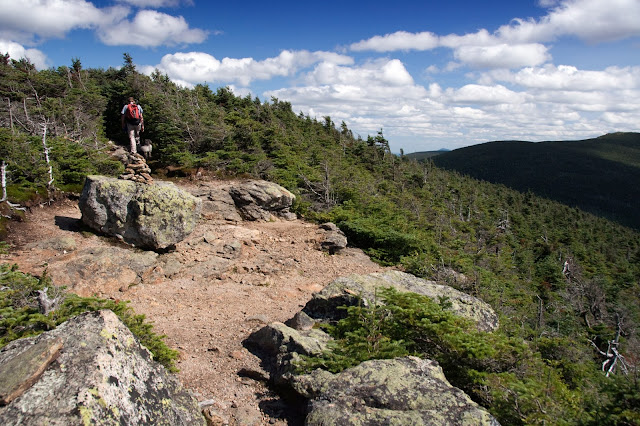 scenic overlook ledge near the summit of North Twin Mtn. 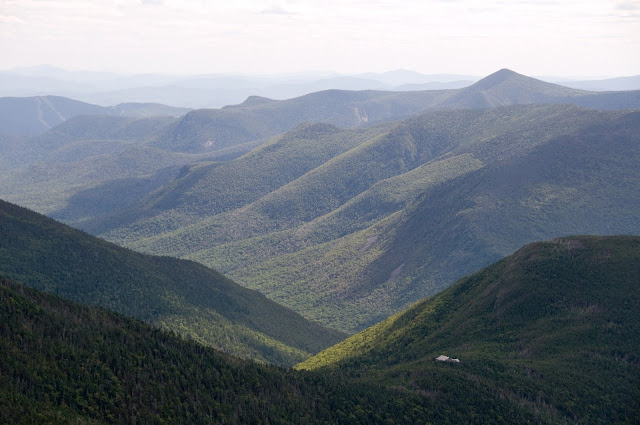 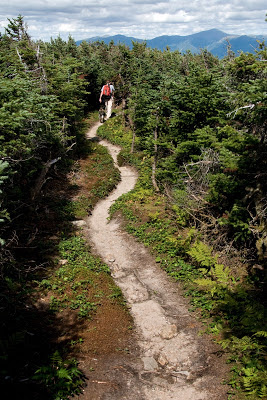 on the way down off the top 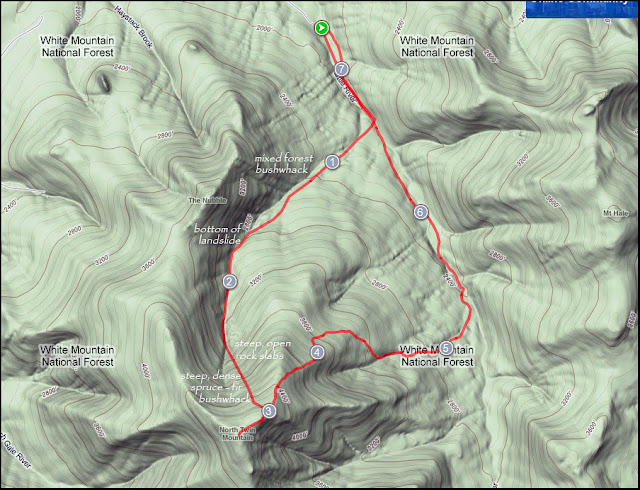 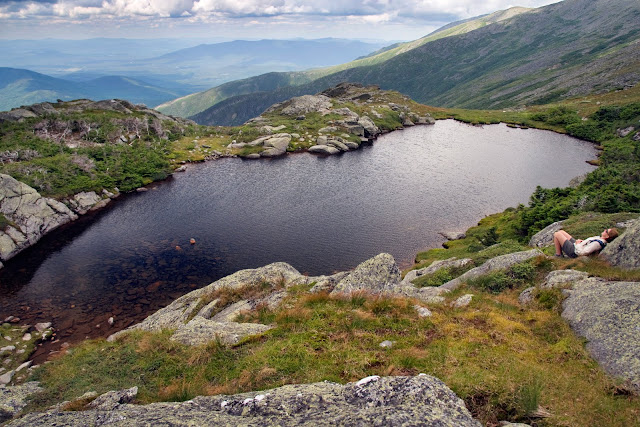 at Lakes of the Clouds in the White Mountains of NH

Posted by Ben Kimball at 7:33 AM No comments: