No hyperbole: Hokas may have saved my running career. They looked like clown shoes to me at first, but before long the appearance meant little and the comfort of the cushioning stood out as the top attribute.

At my friend Jeff Hansen’s recommendation, I bought my first pair —the Challenger ATR—one day at the Northampton Running Company (now Marathon Sports). They were essentially the same shoe as the popular Clifton model but with a slightly more aggressive tread for trails. At the time, I was recovering (as often seems to be the case) from both a metatarsal stress fracture and a persistently nagging Achilles strain.

Since the shoe came with what seemed like several extra inches of heel cushioning, I was able to alter my stride a little bit. Just the right amount, I think. A forefoot strike fell back to midfoot (and even a heel strike on downhills) without any discomfort or joint pounding. This slight shift took stress off the balls of my feet and reduced strain on my Achilles tendon. Within a few weeks both injuries had grown less painful. I realize this is just one anecdotal episode and I’m very wary of attributing too much causality without actual proof or evidence, but it’s hard for me to dismiss the coincidence.

So now I’m running in the follow-up model, the Hoka Challenger ATR 2. And I can’t speak highly enough about it. Little things that had bugged me about the previous version were addressed. A small amount of extra padding was added to the uppers, particularly on the tongue, making the fit considerably more comfortable right out of the box. 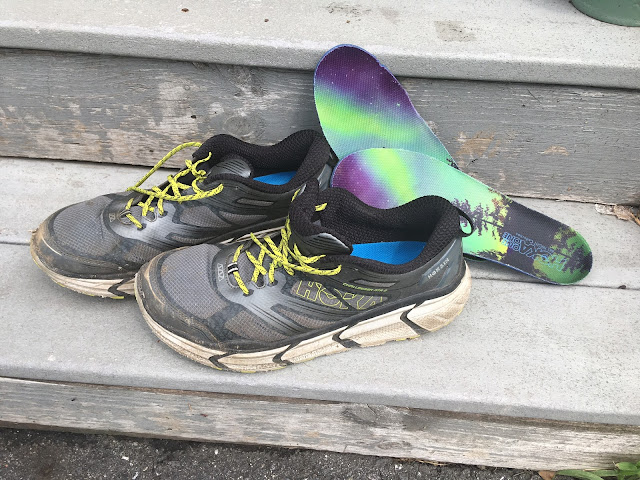 Others have complained that the toe box is now too narrow, but for me it fits perfectly. Up to now, I’ve always run in ASICS (which have a reputation for being narrow in the forefoot) because they fit my feet like gloves—really comfy foot gloves. So if you’re a fellow narrow-foot type, you’re in luck.

For extra support, I added a pair of blue Superfeet inserts in place of the passable but fairly flimsy default ones, and that seems to be going well. No rub spots or chafing (though I’d recommend making your first run with any inserts be on the shorter side, just to be safe).


The shoes are versatile. I wear them on both road and trail and the grip feels good all around. I suppose time will soon tell whether they’re good in hot weather. As for overall durability, I’m still assessing that. My first pair of Hokas lasted over 400 miles. When the newer pair got to 150 miles I noticed some disappointing tearing of fabric at the bend between midfoot and the toes, both on the inside and outside of the uppers; not thrilled about that.

Of course, I still injure myself when I over-train or don’t stretch properly (two shamefully common phenomena). The Hokas don’t make me run any faster. They can’t make me seem intelligent. They do not regrow hair in my bald spot. And the whales still need saving. So no, they’re not miracle shoes. But by golly they do seem to come pretty close. At the moment, it seems they’re just what I need.

This was supposed to be the day that I ran a 50-miler at Wachusett. Instead, I took three full weeks off with no heart-rate raising exercise to minimize scarring on my face after I had a spot of basal cell skin cancer removed, which saved me from, you know, cancer (on my FACE!), but pretty much wrecked my spring training. So Jen and I tried out a 10-ish mile trail run along the Mahican-Mohawk Trail in western MA instead.

We'd run the "main loop" at Mohawk Trail State Forest before, as part of researching my guidebook Trail Running Western Massachusetts, but I'd never been on the section of Mahican-Mohawk Trail that leads west from the summit of Clark Mtn. and goes several miles over to the "village" of Drury, MA, near the top of the climbing along Rte. 2. I'd heard that the trail is really nice there, and we'd seen that some bridge work had been done recently in the woods just beyond where it crosses Rte. 2, and wanted to check it out.

We parked at the big gravel lot along Rte. 2 on the south side of the Cold River, crossed on the bridge, and headed right on the dirt road at the gate. The M-M Trail, which at present doesn't exist as an actual trail between here and just east of Shelburne Falls, officially starts at a trail sign where a hiking path leads left into the woods. About 2 minutes in, we arrived at a new trail junction. Since I had created the book profile for this site, a new link trail has been established connecting this spot to the Thumper Mtn. Trail (I'll have to go back and map it for the QR code map; look for a revised map soon!). 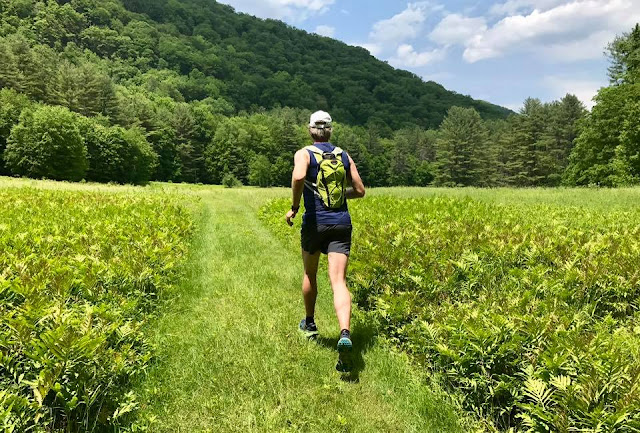 Crossing the meadow on the Mahican-Mohawk Trail.

We followed the book route all the way around and up to the saddle between Todd and Clark mountains (note: the section through the woods just beyond the open meadow below Todd Mtn. is poorly blazed at the moment, and you will wonder if you are still on the trail; you are, just keep going). From the saddle we turned west and climbed up and over Clark Mountain and then got to the new (for us) stuff. 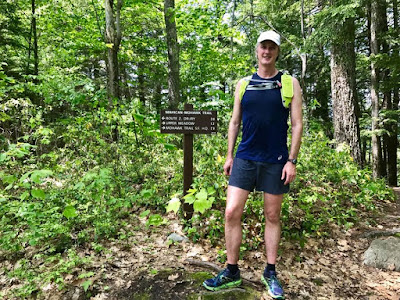 After the grueling ascent to the saddle between Todd and Clark Mountains.

The trail drops gently over the backside of Clark, traverses along the upper west slop a bit, and then drops steeply down some switchbacks. It bottoms out at and crosses Wheeler Brook (a tributary of the Cold River) beneath some conifers, then rises up a slope on the other side as it continues west. 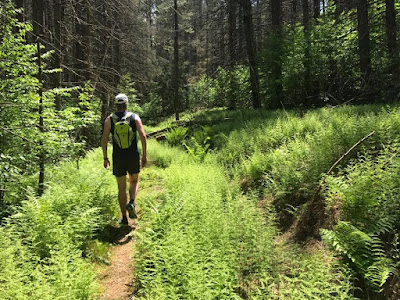 
From there the trail climbs to another high spot along a forested shoulder of the ridge, then drops again and traverses the slope to a series of new bridges and boardwalks along an old woods road network just southeast of Drury. Then the trail pops out at and crosses Rte. 2. We checked out the new bridgework on the the other side then reversed our run back to the Todd/Clark saddle.