Have you discovered CityStrides yet? I happened across this website a little over a year ago and have been obsessively checking my "LifeMap" ever since. Basically it tracks and measures your progress in running the streets of any given town you've run in. There's no rewards, no kudos, no social media aspect or anything to it, just your own satisfaction at steadily increasing your percentages.

Put simply: the site uses your mapped data from Strava or whatever-other route mapping app (when did we start referring to actual websites as "apps"?) you use and compiles it as part of your overall profile. If you allow it, it happens automatically and usually within an hour or so of uploading the data (to Strava, in my case). 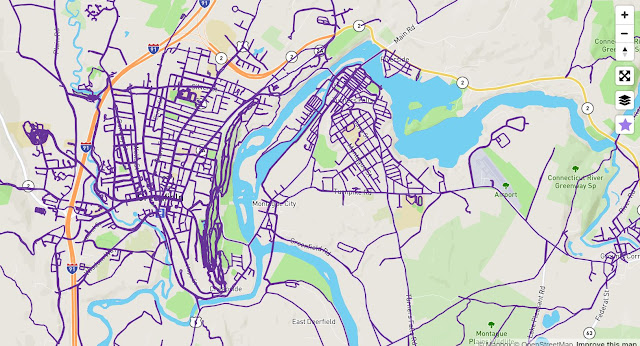 streets and trails I've run in Greenfield and Turners Falls, MA since fall 2017

I completed my current hometown of Greenfield sometime last summer. Doing all the little side streets and dead ends and cul-de-sacs and remote routes provided me with a fun way to keep my mileage up last winter and spring. It might be an obsessive-compulsive runner's dream, or maybe nightmare. But I found it to be a perfectly entertaining complement to my need to go put in miles as I trained for a 50-miler.

As a regular trail runner I also enjoy just seeing the linework of my map get denser and denser all around as I explore new places (or revisit places I haven't been to since I started using a GPS watch), and viewing the ground-truthed map of my adventures grow. 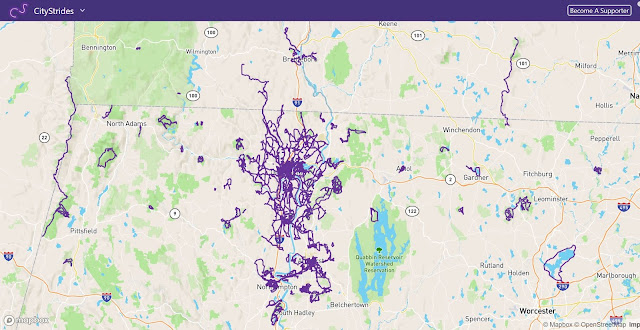 where I've run in Western MA since late-summer 2017

It's not perfect. For one thing, it only goes as far back as when you started tracking your runs with GPS. In my case, I got my first GPS watch in late September 2017 (prior to that, I mapped trails with a reliable, handheld Garmin unit), when I was 45 years old. That means there's a LOT of linework missing from my LifeMap, especially in places like Amherst, Williamsburg, and Boston, MA; Concord and the White Mountains, NH; Middlebury, Richmond, and Burlington, VT; Leesburg and Arlington, VA; and, of course, pretty much all of Mount Desert Island, Maine, among other places I've lived and/or visited. I'd love to see a comprehensive map of all the routes I've actually run in my life.

Also, for some reason a lot of the towns in my particular county seem to include non-road features such as the boundaries of conservation properties, the outlines of buildings (Deerfield Academy is a particularly notable offender in that respect), railroad lines, and, in some cases, river centerlines. So for towns like Deerfield and Shelburne it's impossible to run much beyond 80% or so. And lastly, some roads are just mis-mapped, or shouldn't be there in the first place since they're either super-dangerous (like Rte. 2 in MA) or private and posted No Trespassing. But still, despite those limitations the app is a real pleasure to use. 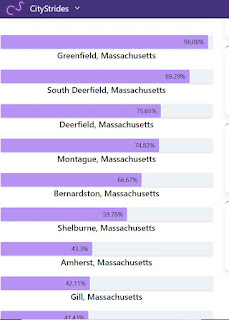 So basically, if you're interested in seeing a current heatmap of everywhere you've run since you've been using a GPS watch, or would be amused to track your progress at running all the streets of your town or nearby towns, definitely give Citystrides a look. https://citystrides.com/

Posted by Ben Kimball at 2:27 PM No comments: