Last Saturday I tried a one-two punch of running the Traprock 17K trail race and then turning around and photographing the second half of the 50K ultramarathon (which had started an hour before the 17K). And amazingly, I was mostly successful!

The 17K race (~10.5 miles) went pretty well. I came in 12th out of 70, and felt great the entire way. Upon finishing, I walked straight to my car where I changed shirts, socks, and shoes, and grabbed my camera and backpack. Back at the finish area I scarfed a burger at the grill (THANK YOU, volunteers!!!) and downed some water, then started shooting.

The first round of photos, mostly of the tail end of the 17K, didn't turn out all that well. I was a little wobbly still, and not quite as confident as you have to be to get good shots. After heading back out on the trail a ways, though, things started to improve. I wanted to come away with a gallery that really represented the full diversity of the course, and I think I more or less pulled that off. I hiked a total of 6 or 7 miles, and got back out to Penwood Ridge, Lake Louise, the Stairway, the summit, the cool columnar-jointing rock outcrop beneath the hemlocks along the ridge, the "Freeway" section (where the mid-day sun came out for a bit to wreak havoc with exposure), and back again.

To the race directors: this is an AWESOME event. Thank you.

To the woman who shouted out "make me look skinny!" I should have shouted back "you make it too easy!"

Apologies to the runners who I saw over and over again as I made my way around the middle part of the course. I know it got a little silly. Hopefully there's a photo or two of you in there to make it worth the overkill.

And I've included a few highlights below. 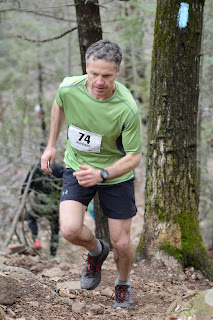 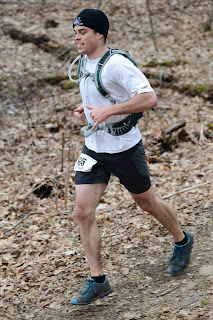 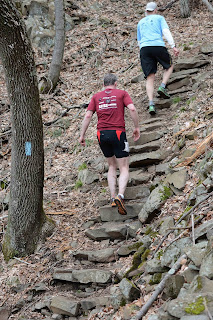 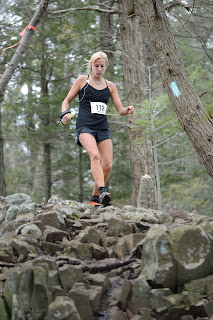 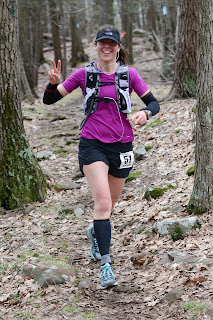 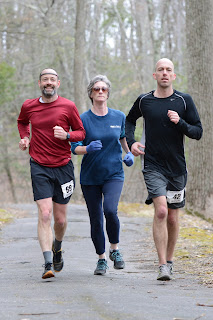 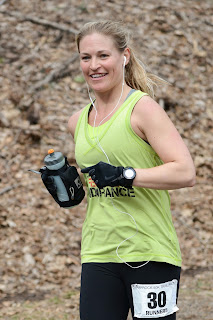 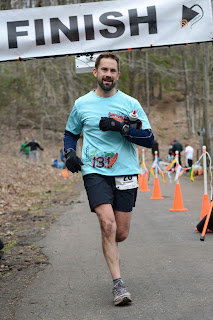 Posted by Ben Kimball at 3:23 PM No comments:

black is the color and none is the number

I don't know what to say.

As a runner, as a marathoner, as a Massachusetts resident, as a New Englander, as an American, and just as a person. I feel sick and angry and sad. It's exasperating. It's infuriating. And it's devastating.

I've read a lot about religious fundamentalism lately, trying to understand why this world is the way it is. On some level, I can conceive of why a suicide bomber would detonate himself. Because he sincerely believes the other faith is wrong and immoral and that there will be a paradise waiting for him after his act of "holy" horror. And that's one dogma versus another. It's still repugnant and despicable and inexcusable, but I can conceive of what's going through their minds. But attacking things that have nothing to do with what you oppose? What the hell is that? That's like the mean kid who punches anyone and everyone at random because he's kind of just a sociopath at heart.

[In no way do I mean to imply that ANY act of terrorism is OK, and anyone who knows me is damn sure I wouldn't excuse one in the service of religion.]

Whatever sick shit is going through the heads of the people who did it, and I'm sure they feel they did a good thing on some level, I can't help but wonder what kind of twisted mind could possibly convince itself that it's righteous to destroy people's lives when they aren't doing a damn thing to impact you on any level.

The Boston Marathon. The Marathon. The event has meant so many things to so many people, but a common theme for all is that it's a celebration of life and health and joy. There is no dogma. There is no religion. There are no politics. Yes, there's red tape and bureaucracy and the like. But that's simply because it's gotten so big and takes place in a major metropolitan setting; it has to be that way. In essence, though, it's just a festival of fitness, for everyone to either earn their place in or enjoy the spectacle of. The best of what we all can be.

To everyone who was at the marathon or in Boston yesterday, I feel so much heartache for you and you have all of my sympathy. Courage to you.

Four new race photo galleries up this week! I ran around and shot a lot of races last week, and then processed a LOT of files. In order of most recent first, these were the races:

The Rob Hebert 8-Miler was my favorite of the week. Run by my local running club, SMAC (Sugarloaf Mountain Athletic Club), it's one of the oldest road races in New England, and attracts a small but very fit group of runners. All of them seemed to be having a great time, and I have to admit I had a great time taking shots and even processing the photos afterwards.

The Belchertown 5K was very much a parents and kids affair, and all sorts of awesome because of it. While it was frustrating to find a good spot to shoot in town, the sight of all sorts of parents out there with there kids brought a big smile to my chilly cheeks. Special thanks to the race director for being so excellent about spreading the word on the photos!

The UMASS 5K started one hour after the Belchertown one, so it took a quick haul to get over there in time. Hundreds of runners threaded through campus, many of them students. I got a LOT of thumbs-ups and peace signs and big smiles at that one, there were a couple of spectacular costumes, and in general the mood was excellently positive; very fun.

The first Holyoke Elks Lodge race of the year got off to a late start (which I hear is not uncommon for that race), so by the time the runners got out to where I was by the reservoir (a very scenic spot in late afternoon light), it was 6:50PM and the sun had already sank behind the ridge just to the west so it was pretty dark. Adding to my irritability here was the fact that, although it had been a beautiful afternoon, the temperature had dropped fast and the wind was blowing about 15 miles an hour. I'd gone for a run around the reservoir beforehand and even though I was now wearing a bunch of extra layers and a hat I still got really cold standing around waiting. I ended up just giving up trying to take shots of the runners near the finish. I was up to 1600 ISO at f/4 and it was still too dark. Nevertheless, it's a cool race and I'll definitely go back later in the season.

I also managed to cram in 40 miles of running last week, about half of which were on trails. Psyched to run the short course at Traprock this Saturday (and hopefully take some shots of the 50K afterwards).

A highlight of any race is seeing parents out exercising with their kids. Seriously, it warms my heart, every time. I'm gonna do a whole blog post about this topic sometime soon.


Some favorite shots below

two from the Ron Hebert 8-Miler: 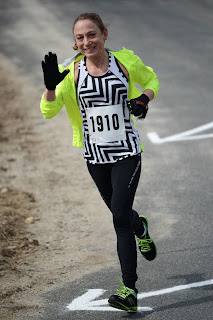 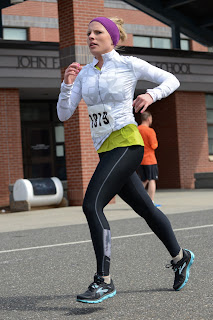 three from the UMASS 5K: 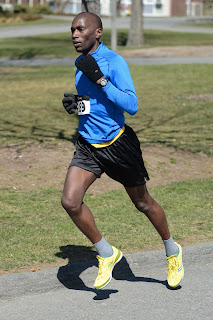 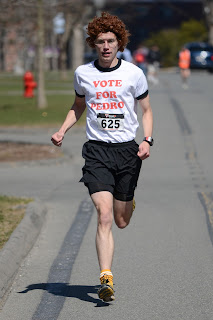 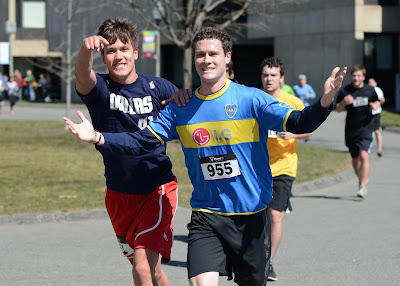 two from the 5K in Belchertown: 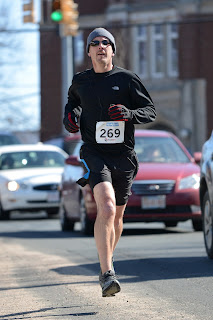 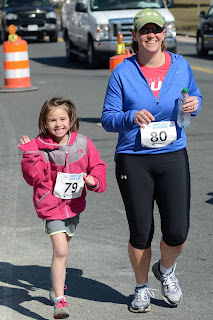 four from the first Holyoke Elks Lodge 5K of 2013: 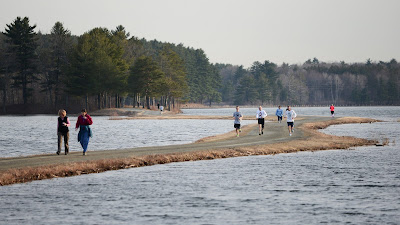 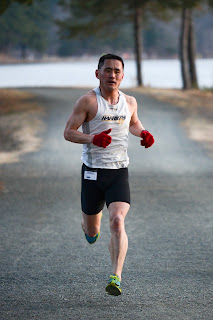 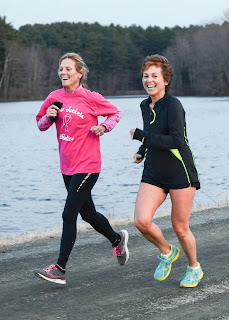 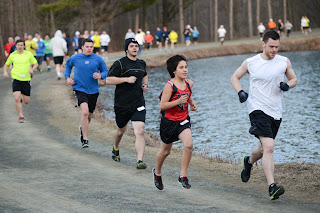 Posted by Ben Kimball at 8:46 PM No comments: