I've always preferred middle-distance races. In high school track my favorite was the 800m. Not the mile or the shorter sprints, but the neither-sprint-nor-distance 800. And the trail races I really enjoy often seem to be in and around the 10-16 mile range.

So this spring, as I recover from last fall's blood clot episode, I've decided to run what makes me happy (never mind that I wouldn't be able to go longer even if I wanted to... quiet, you!). If it all goes well, perhaps I'll (be able to) bump up to big miles again in the fall. But for now it's a season of my faves: middle distance running races.

First up was the brand-new Black Birch Vineyard 10-miler in Hatfield, MA on March 31. I came in 53rd out of 381, finishing in 1:21:30 (an 8:03 pace). This was a fairly straightforward out-and-back 10-miler, mostly on rural roads starting in the flat part of the valley and climbing for five miles up into the hills. I hadn't run a proper 10-miler in years, and remember now that it's a great place to exercise your pacing skills in the early miles. 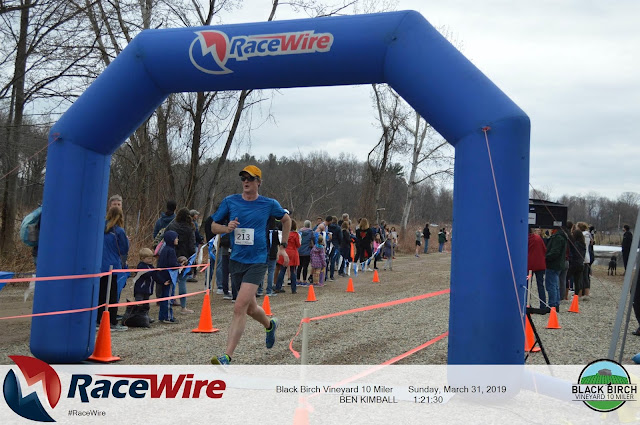 Next was the 22K short course at the also brand-new Mt. Toby Ultra in Sunderland, MA. I came in 26th out of 51, in 2:57:05. This was a somewhat strange event, as some local assholes came along and moved the marker flags around mile 2 and the entire field of both the 22K and the 50K ended up all bunched together and going off on mile-long tangents in the wrong direction, etc. Somehow we all got back on track by mile 5 or so, and though I wondered how anyone could salvage a good time in conditions like that, some people REALLY ran fast in this one. Before the screw-up I'd been near the front of the middle of the pack, making pretty good time. At the end of the screw-up I was near dead last, feeling some weird sense of responsibility for making sure no one ended up lost. I slowly gained ground again during the course of the rest of the race, but not nearly as much as I thought I would, and ended up right smack in the middle. I didn't feel like I could have gone much faster than I did, especially on the big downhill from the summit, which went straight down the wet and rocky telephone line trail, a tricky descent even in drier conditions. At any rate, I ended up running near my friends Dawn and Jeff for the last few miles, so at least I was in good company. A really bright note about this one: the cave section. For a few hundred feet, about 3 miles from the finish, the course goes into and through a cave that's just long enough to actually get completely dark in the middle. Tom Davidson had set up a string of lights and a couple lanterns in part of it, and it was really pretty cool. Very much a unique and fun novelty part of a trail race course. It was drizzling most of the way and temps were chilly; I wore quarter-tights and gloves and a rain cap the whole way and was comfortable the entire time. 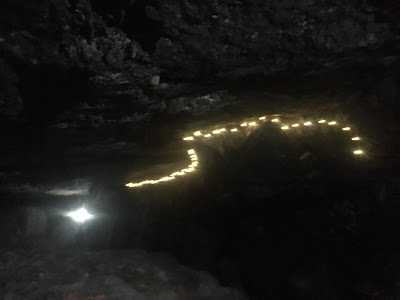 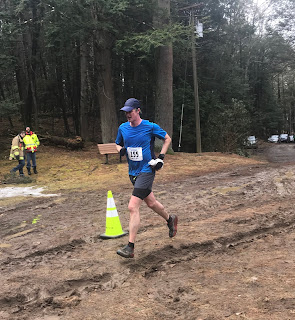 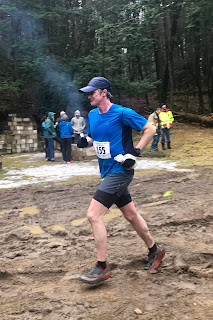 Last race for this window was a short one, the Big Cheese 5K over in Athol, MA. I hadn't run a 5K in years either and wanted to see how it would go. I wasn't quite back in fighting form, but I did alright, coming in 35th out of 318 in 23:55. That's at least a few minutes slow for a 5K for me, but this isn't a fast 5K. There's a couple of short but steep hills, and a couple of long, steady ones too. 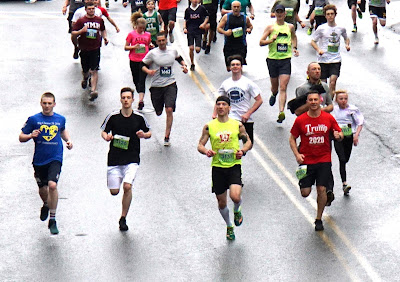 that's me in the yellow singlet near the top of the photo,
behind the guy in the red "Trump 2020" t-shirt. 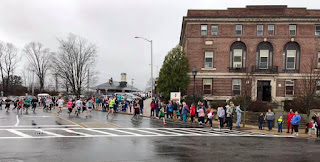 After this we'll be taking a vacation to the desert southwest for a bit, but after that it's back to New England and a couple of mid-distance trail races I've been looking forward to for quite some time...

Posted by Ben Kimball at 7:12 PM No comments: