By late February a lot of people here in western MA were ready for spring. Not because it had been an especially snowy or cold winter, but because they were just understandably sick of icy sidewalks, AWOL road shoulders, and muscles that won't loosen up sometime in the first mile or five. Many of our trails lacked snow cover but featured exquisitely treacherous ice ribbons better suited for skating than running or even hiking. It had definitely been THAT kind of winter.

But it was a different story just across the border up in Vermont. The southern Green Mountains and adjacent northern Taconics (see regional map) kept collecting snow, as they often do in later winter. Ski areas did well, and snowshoe races continued quietly (too quietly, I fear; I hope they see a bump in numbers next year) throughout the season. Which of course made ME happy, as I'm a well established winter lover.

On Sunday, March 3, I ran the 25K race at the Merck Ultra snowshoe races (formerly advertised as the "Mystery Ultra" earlier in the season) at Merck Forest near Dorset, VT. The race was part of a series put on by Nor'East Trail Runs. The weather was perfect for it, with a few inches of fresh fluffy snow on the ground covering up the occasional icy patch, and the temperatures hovered around 30 degrees. 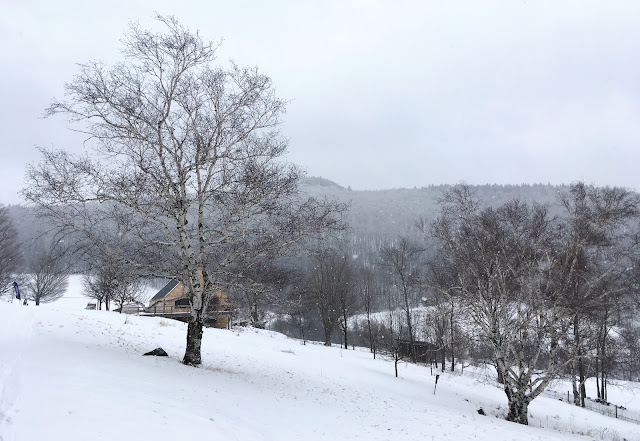 The Sap House at Merck Forest

The course consisted of two out-and-back segments, one long and one short (both hard). The longer segment climbed steadily up Old Town Road and Antone Road to a cabin in Clark's Clearing, then up a steep part of Antone Road, then down Wade Lot Rd to the cabin in the clearing at Ned's Place, and then up a convoluted series of trails (including a really steep singletrack section) to the top of Antone Mountain (2600). And then back. The shorter segment rose briefly from the aid station at the start/finish area, passed across an open field, and then descended (gently at first and then steeply), to Stone Lot Cabin. And then back. The 25K race included 2 of each segment. Official trail map for the property here.

Snow conditions were really good. You could usually get pretty good purchase on ascents, and you never slipped around too much on descents. Probably the first people out on the 50K race, which started 2 hours earlier than the 25K, had to break trail a bit, but there wasn't that much fresh powder and I'd imagine that it wasn't too much of a hardship for the leaders. I didn't bother wearing gaiters, and didn't need them (although there were a few descents where I kicked up enough powder to get some in my socks and shoes). 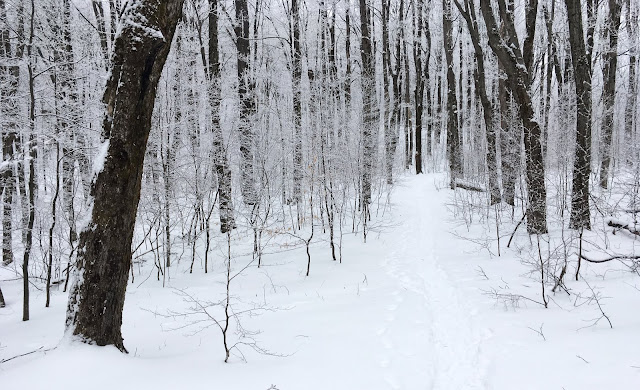 gorgeous frosted forest on the way up Antone Mountain

panoramic shot from a vista on Antone Mountain 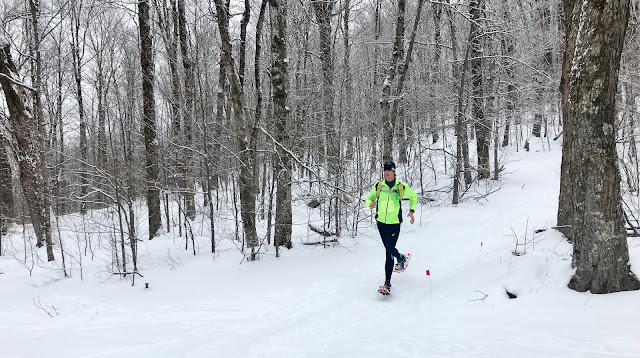 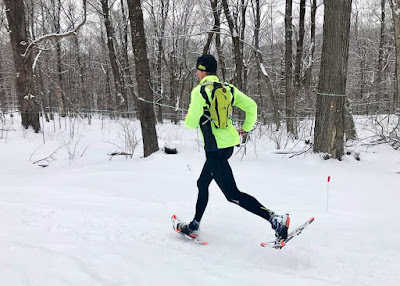 After my first time up and down the mountain, I lingered for too long at the aid station. But you'd have lingered too. Adam and Eliza, the amazing race directors and all-around support crew for anyone doing their event, brought out cups, one by one when needed, of HOT CIDER. Just... wow. The tasty warm liquid was so heavenly and made the perfect temperature regulator / thirst quencher. 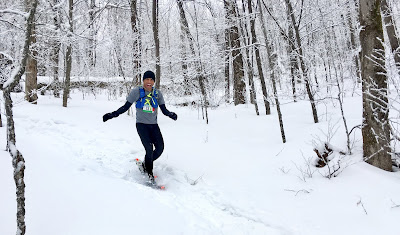 Ditching my hydration pack for the shorter out-and-back spur down to Stone Lot Cabin, I made good time across the open field (windy on the way back) and down the startlingly steep drop through the woods past the orchard. That descent required a notably tough trudge on the way back up. Back at the aid station I re-grabbed my pack (which I didn't top off, and did feel lighter now with half the water already gone) and headed back up the ridge. Then I wasted a precious few race minutes at the outhouse next to one of the trailside cabin... you know what, never mind that last part. Moving on! 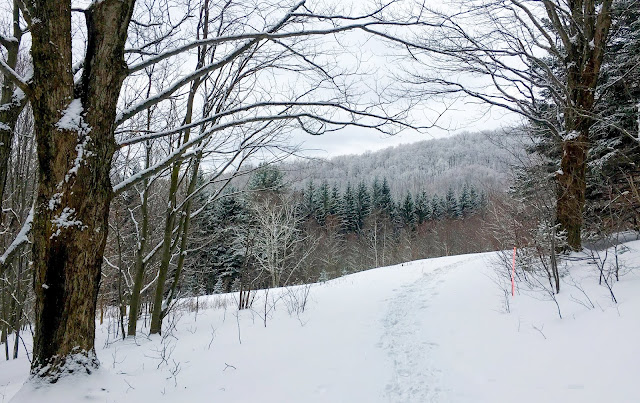 the field with a view near Ned's Place

My feet were sopping wet for pretty much the entire second lap. I'm never sure exactly what the cause of that is, whether it's snow melting on my shoes and socks or just hot feet sweating too much. Either way, I do seem to reach a point in longer snowshoe races where I know that the very first thing I'm gonna do when I stop is change my socks.

While I was out running around the white woods with tennis racquets on my feet (for over FOUR HOURS), Jen moved about the property on her backcountry skis and apparently had a terrific time on her own adventure. Her circuit coincided with our trail for about half of the big out-and-back to Antone, and she took a few photos of us when our paths crossed. 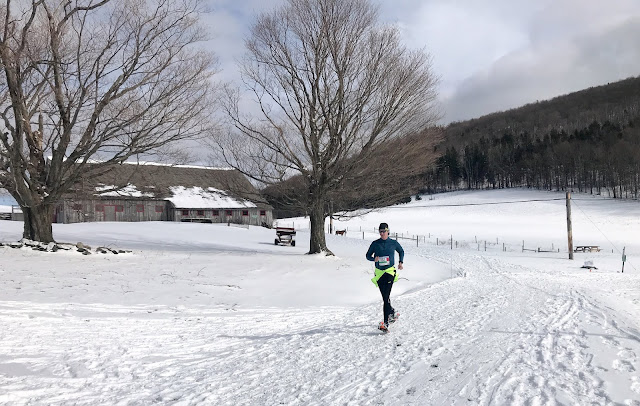 Since there were so few runners in either race, and each person went at their own pace and took different amounts of time at the aid station, etc., it was an inherently solo affair for most of the time. But I still spent a few moments with fellow runners Bernie Gee (who won the 25K), Ethan Nedeau (who was a really fast 25K as a drop-down from the 50K), and Candi Christenson (who has run four other snowshoe and/or mountain races this winter right around the same pace as me), as well as a friendly guy named Matthew and a young guy who'd never run in snowshoes before but did quite well, considering. There were a few guys doing the 50K who astonished me every single time I saw them because they seemed to be running really fast, even up the hills; those are some TOUGH dudes (I saw the leader sitting on the picnic table bench at the aid station with just 3 more miles to go, sighing about being pretty deep in the "pain cave"). 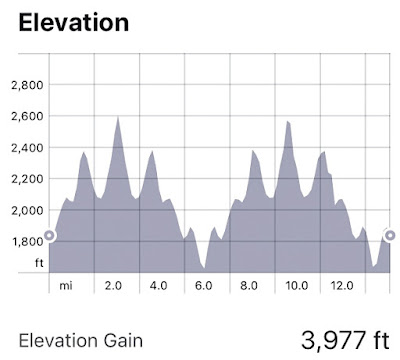 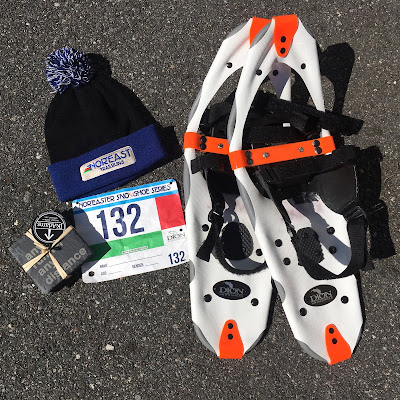 Thanks to Adam and Eliza of Nor'East Trail Runs for organizing and putting on such a fun event at such a terrific site. I'd heard about Merck Forest for years and am really psyched that I finally got to experience it, and doing something I love at the same time. The course isn't easy, but it's definitely a super fun one to run.