Putting Myself Back Together on Greylock

Three years ago I shared a blog post article about a less-than-satisfactory race at Mt. Greylock (see the post here). I told myself I would do better someday, though not until I knew I was ready. Then this past winter I wrote a blog post about getting blood clots in my lungs (see here). All bets seemed off and I wasn't sure where any paths would lead. The past 6 or 7 months have been all about recovery. Which brings me to today. Today I ran the Mt. Greylock Trail Race half marathon again.

But it wasn't just a chance for me to better my time (and hopefully have more fun) at it. It was also Jen's first time running it. She'd been wanting to run it for years and understandably was nervous. There were a lot of unknown variables, including current fitness level, new shoes, and orthotics. And the weather. This year it decided to rain on race day. A lot. Which is always a wild card factor when it comes to orthotics. Anyway, we got plenty of rest the night or two before, rested up on Saturday, and ate well but not too much. We prepped our clothes and gear and were all ready for race morning.

Cutting to the chase: I felt good on the initial climb. It took me a minute longer than last time, but I was OK with that since part of my goal was to keep my heart rate fully in check (I maxed at 183 and averaged 160 for the race) and make sure I had plenty in the tank for a successful second part of the race. So far so good.

Dropping down from the summit I passed a couple of other runners, but mostly stayed pace with my friend Wayne Stocker and another guy. I was surprised to pass my friend Laure at the end of the Overlook Trail. She said she was terrible at descending. I maintain that she just needs to work at it; I bet with some practice she'd be able to fly down as effortlessly as she soars up.

Arriving at the second aid station, I still felt good and my confidence grew that I'd have a better race than last time. The descent of Jones Nose was probably the most treacherous spot on the course, with steep, very slick stretches of mud and smooth wet dirt, as well as a few spots of slick rock ledge. I passed two people on the way down and felt great flying down and across the open meadow under a steady drizzle.

After a quick half-bottle fill at the 3rd aid station (thanks, guys!) I zipped down the grassy road section for a mile or so to the start of the final climb. By this point in the day the muddy puddles were too numerous to avoid and I just plowed through. Took two salt tabs on the climb to stave off the hamstring cramps that I could feel hovering just out of sight. The long descent of relentless rocky doubletrack was still long and rocky, and relentless. There were a few super-slick steep sections along singletrack trail just before reaching the bottom, but thankfully no falls and no near misses. I opened it up as much as I could and ran relatively hard all the way to the finish.

My time was 2:48:30, a full 7 minutes faster than last time. I can't call it redemption or anything -- I feel like I'd need to have taken at least 10 minutes off for that -- but I was pleased nevertheless. I did better and, most importantly, felt better. I enjoyed the run, even in the rain and mud, and never cramped or fell or faded. Jen, however, crushed it. She finished in 3:13 with a big simile and a joyous whoop as she crossed the line. Her feet held up and no blisters from the new shoes or orthotics, thankfully.

We both had lubed up a lot beforehand so also no chafing from our sopping-wet singlets or shorts. I feel like my recovery is continuing well, and I keep chipping away at improving my times. All around, an enjoyable, successful day!

Posted by Ben Kimball at 9:45 PM No comments:

Continuing a minor trend for me at trail races this spring, there was perfect weather at the annual West River Trail Run in south-central Vermont this past weekend: low 60s temps to start and breezy with occasional clouds. I can't emphasize enough how nice it was in contrast to days when it's 10 degrees hotter, or more humid out. 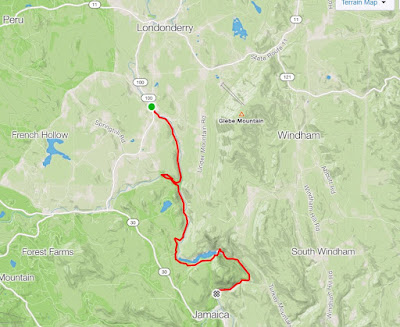 In addition to bettering my 2016 time, my other goal had been to just enjoy myself the whole way. It's well within my experience level to pace myself properly in the early flat miles, such that I don't blow up or tire myself out too much (i.e., to not go out too fast). And one of my great joys in life is zipping through the woods on swooping singletrack trail. And at 47 I can't see much point in spending my time feeling anxious at an athletic event I paid to have fun at. So my mindset that morning was simply to make sure I was smiling, at least on the inside (you rarely see me actually smiling in race photos). And thankfully, I succeeded at that too. 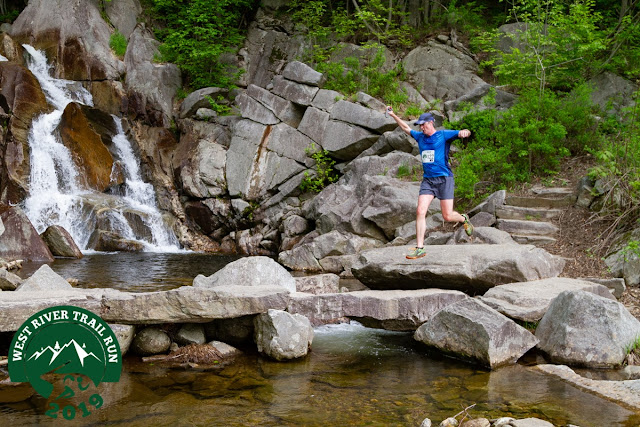 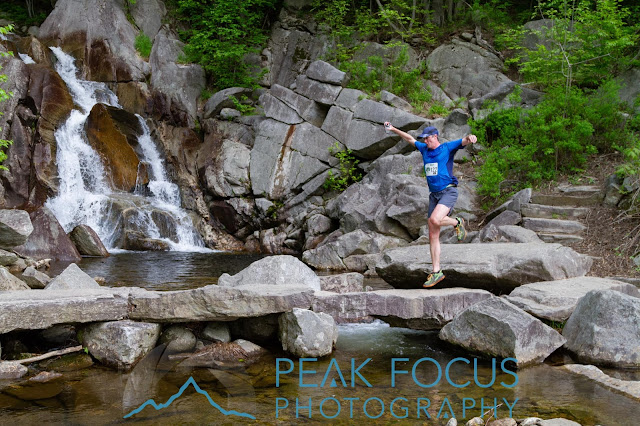 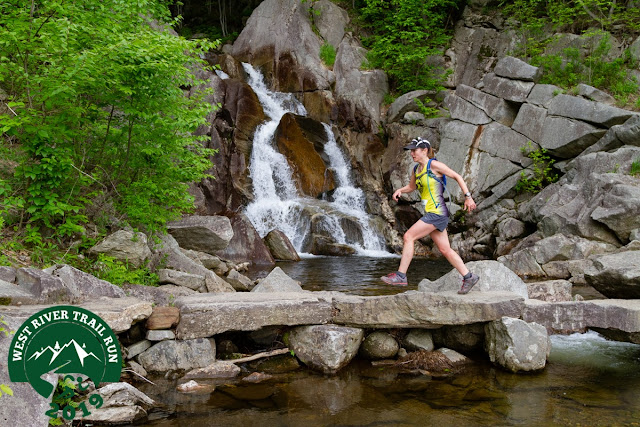 Posted by Ben Kimball at 7:04 PM No comments: