Technically the darkest day of the year is the one with, naturally, the least amount of daylight (i.e., Winter Solstice), which was Friday, Dec. 21. But for those of us in the Pioneer Valley region of western MA, the earliest sunsets of 2018 fell on Dec. 8 and 9, when the daytimes ended at 4:16 p.m. For the six days before and the six days after, the sunsets occurred at 4:17 p.m. And for those of us who are in no way morning people, that two-week window from Dec. 2 to Dec. 15 was the true darkest time of the year. I do my runs in the evenings after work, and I’m more affected by that early December time of earlydark than I am by the upcoming mid-January days when it may seem darker (likely due to the limiting factors of ice and snow on our regular running routes).

Which isn’t to say there aren’t still other challenges. Last year I wrote an article in my running club's newsletter specifically about how I generally don’t find November as tough to take as many others seem to (see p. 28 here). It probably helps that it’s my birthday month, and I’m more or less at peace with aging (we’re human; it’s what we do). This year, however, November tested even me.

With weeks of below average temps and several early snowfalls that took their sweet time melting, we runners had to tap into our Winter Motivation reserves about a month or two ahead of time. Thanksgiving morning races in particular presented an existential conundrum: get up and overdress for running because it was ten degrees out and windy with snow/ice on most surfaces, or, you know... don’t do that. To their credit, many local runners chose the admirable, tough-as-nails option and got out the door. That is a tribe I want to be a part of!

NOTE: This post is an excerpt from a column in the latest issue of the newsletter that I'm the editor for, The Sugarloaf Sun (a publication of the Sugarloaf Mountain Athletic Club). See the rest of that issue here on the club's website: 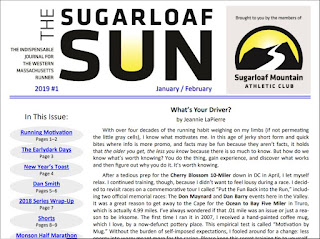 Posted by Ben Kimball at 8:47 AM No comments: