As a brief recap of previous bonus site posts: my guidebook Trail Running Western Massachusetts (click here to view the book's page on Amazon) profiles 51 of the best trail running sites in the region. It was a challenge to whittle down the final list included in the book to just 51 sites, and some that I really like or that would have been nice to include had to get cut for space. I occasionally post profiles of some of those "bonus sites" here and link to them from the book's Facebook page (see the Chapel Brook to D.A.R. Trail, Mormon Hollow, and Ashley Pond posts for previous examples).

This bonus site, the Saw Mill Hills Conservation Area, just wasn't quite ready when the book came out in 2015. That same year, the city of Northampton and the Kestrel Land Trust worked together to add 50 more acres of protected open space land to the existing conservation area, and an effort was undertaken to mark many of the trails in the southern half with colored paint blazes.

The area has long been a favorite of local runners and mountain bikers, and with good reason. The newer trails are remarkably well-built and fun to explore, organically winding up and down and around the hillsides. The mountain bike community deserves special praise; they are the ones who created most of the singletrack here, and they continue to do most of the maintenance. As trail running continues to grow in popularity, I strongly encourage runners to step up and get involved with stewardship. There is no reason runners and hikers and bikers shouldn't all share in both the fun and the work. 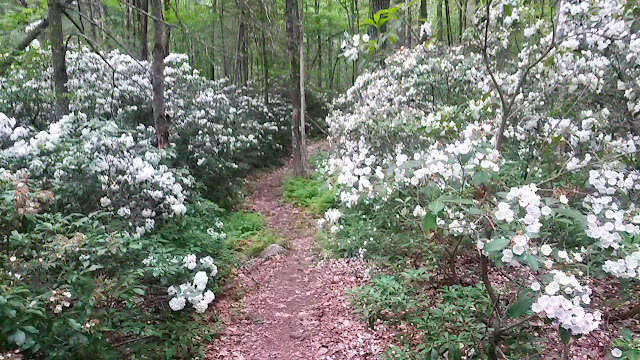 The map combines the main Saw Mill Hills block with the Roberts Hill complex just across Chesterfield Road to the north. The eastern part of Mineral Hills also shows up. A 2015 news story reports that efforts are under way to eventually connect Saw Mill and Mineral Hills with a trail, which would just be fantastic. Trail names on the map are an unofficial mish-mash of names on the official site map of the property posted by the city and names I found on Strava segments and various other online maps. 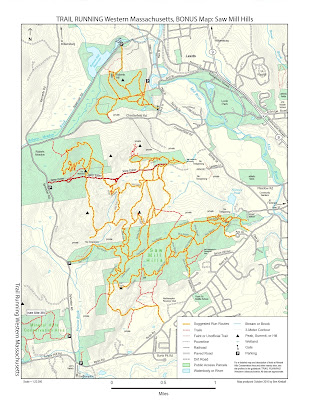 click thumbnail image above to link to full-size map

Trails that are good for running are depicted on the map with a slight yellow highlighting. It would be very easy to rack up an 8-10 mile run in there without ever covering the same ground twice. In general, the suggested trails at Saw Mill Hills would be classified as moderate in the book's difficulty rating system.

Other trails are very rough and rocky and not especially fun to run. The so-called Jeep Eater road, a main east-west artery through the property, is particularly rough and eroded these days (I once slipped on loose gravel on one of the bare ledges and smashed an elbow up pretty fierce, in addition to getting a good whack to the noggin), as is the hilltop labeled "The Wasteland" on the map. A few of the newer routes can be challenging to find and navigate, especially when the leaves are down in fall, but they are there.

Speaking of fall, make sure to wear bright orange during hunting seasons, as always. Traveling in pairs or small groups is also probably a good idea. Oh, and at present, hunting isn't permitted on Sundays in Massachusetts. 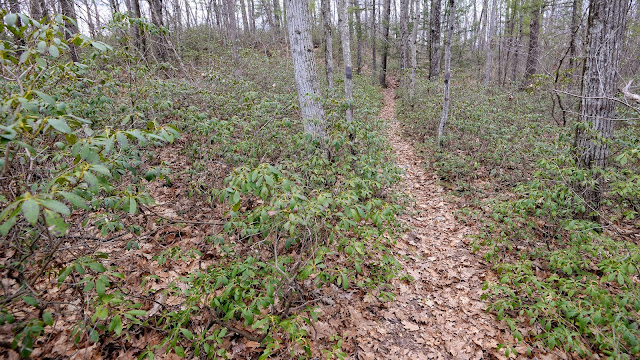 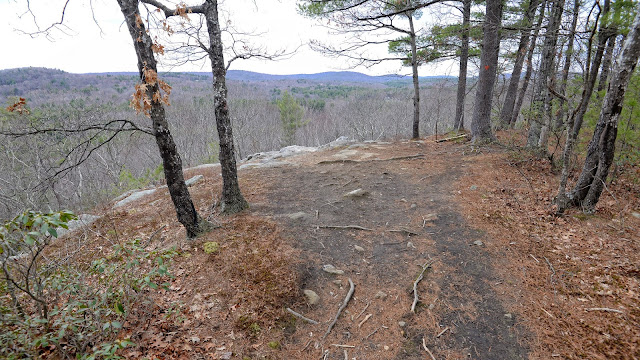 West-facing view from the ledge at the top of Roberts Hill
At present, parking isn't terrific anywhere at Saw Mill Hills. There are numerous legal access points around the perimeter, but some are unmarked and/or pass through narrow access easements alongside private property. Great care should be taken to stay off of any posted land, especially when there are clearly visible "No Trespassing" signs posted.

When done with your run, you've got your pick of great places to eat or drink in nearby Florence and Northampton, but my recommendation is to head over to Building 8 brewery just across the Mill River in Florence to grab one of their amazing fresh IPAs.

Other good nearby trail running sites: The Mineral Hills Conservation Area (site #38 in the book) is just to the southwest across Sylvester Rd.

If you have any comments, complaints, corrections, praise, or suggestions about this bonus site or anything related to Trail Running Western Massachusetts, please comment below or drop me an email with your thoughts!

Recently I had the chance to reconnect with a great guy I knew from growing up in my little town on the coast of Maine. Michael Westphal was always a star runner in the region, but now he has become a bit of a celebrity beyond his former fame. Now he’s also known as “the guy with Parkinson’s who runs marathons.”

I’m not saying anything new here, but holy crow is he achieving something great. Not only is he still doing what he loves despite the severe challenges of Parkinson’s, he’s bringing a tremendous amount of positive attention to the disease and those who live with it. He is raising awareness and changing prevailing perceptions about what is possible. And hopefully raising more funding for research in the process. 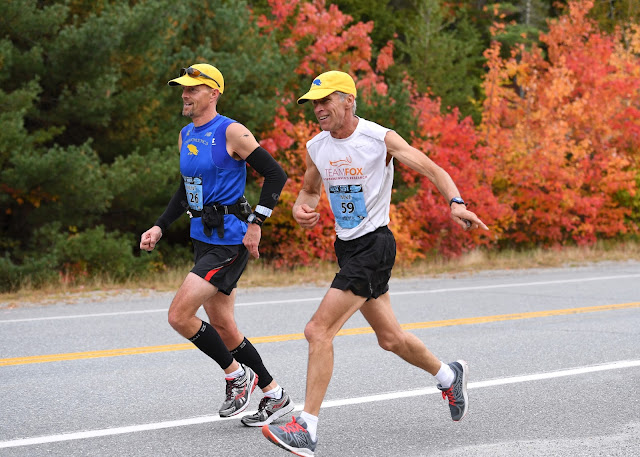 To Mike, cheers to you and all you inspire. I am so impressed with your strength, character, and resolve. Long may you run.

To everyone else, please watch Peter Logue’s short documentary about Mike's story (the film is the first ten minutes of the video): https://www.youtube.com/watch?v=Z4I9sHka2Rc

The film also features moving appearances by members of Mike's family as well as his good friend (and my former crazy coach) Gary Allen; the two of them just ran the NYC marathon this past weekend!

Posted by Ben Kimball at 7:37 PM No comments: