Wow That Was Hard

Skyline Trail. The name may conjure up images of classic western North American mountain ridge-running, soaring through dry grassy meadows along an alpine trail high above Salt Lake City, or along the majestic Cascade Crest in the Northwest. But I’m from the east. I know better. I’ve been fooled before. The Skyline section of the Long Trail in Vermont is primarily rugged forest. Skyline Drive in the Shenandoahs mostly just features occasional scenic vistas at small rocky outcrops and man-made clearings.

And the Skyline Trail in the Blue Hills Reservation south of Boston spends most of its time in rock-strewn saddles between low hills. Nevertheless, the handful of amazing hilltop views of the city illustrate why the name is apt. For those fleeting few moments, the trail really does earn its name.

The 7-ish mile Blue Hills Skyline Trail Race, hosted this year by TARC on July 10th, was about as old school as it gets. Low tech, low frills, and no hand-holding. And as a result, cheap. Which is awfully nice these days. I’d photographed at this race a few years back, hiked part of it way back in 1994 (see scans of journal entries at the bottom of this post), and wanted to get back to check it out. So on a warm July morning I got up really early and zipped out east towards the coast from Greenfield and hoped that the extra pounds I've been carrying wouldn't hurt me TOO much.. 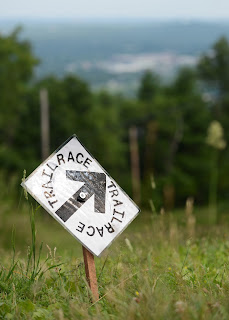 The first few minutes of the race, traversing south along the lower slopes of Blue Hill, provide a nice warm-up on gentle trail with minimal rocks and roots (compared to later). You can actually open up your stride for a short while here, and pass people if you need to in order to place yourself well for the narrower part. Then you take a sharp left and climb steeply up the side of the hill, sometimes via stone steps and sometimes over wet ledges. It was very humid and you immediately felt it. I crossed the access road near the summit at the 11-minute mark. The first view was still socked in with persistent morning fog. After picking my way down the ankle-turning terrain along the North Skyline Trail on the back side of Blue Hill, I began to see why Ben Nephew described the route as “incessantly rocky, rooty, twisty, and undulating” in a 2014 race report.

At 33 minutes in, I reached the first major road crossing just after the State Reservation HQ buildings (where I lost a few seconds unsure of where to go next). The first water station was on the other side of the road. It was a “cupless” race and reality of what that means finally became clear to my dimwitted brain: it meant carry your own bottle or no water for you. I tried to pour some in my cupped hand but ended up with very little water to drink. My decision to not carry water was a dumb one this day. It was way too humid to go the whole way without hydration. I fretted about that a bit but pushed on.

The next section climbs a paved park road and then it levels off and you really get to open up your stride for a mile or so of dirt carriage road. At 50 minutes in I reached the halfway point where thankfully there were a few cups at the water station. I drank what I could and carried the cup with me from there.

At the top a steep ascent on Buck Hill, there was a fantastic view of Boston at the top of a hill covered in low scrub growth vegetation. That would be a sweet spot for a photographer to wait at some point. Then the trail descended steeply and traveled over more rugged terrain, rising and falling over North Boyce Hill and Tucker Hill, with a few sharp turns. Then we crossed the road, climbed steeply up Houghton Hill, dropped sharply yet again, and soon enough began a long gradual ascent back up Blue Hill.

After screaming down a dirt track on one of Blue Hill’s a grassy ski slopes at the end, I finished in 32nd place with 1:40:38 on the clock (the winner finished a full half hour earlier). There were 68 runners overall.

So, in summary, there were four general sections (or waves, as another blogger called them) to the course:

Overall, there were about a dozen sharp ascents / descents requiring a brief bit of scrambling on either end. The course was entirely unmarked and you kind of had to know where to go and which trail to follow. Believing that I had it memorized I didn’t bother to bring a course map with me. That was stupid. I was glad to find myself running with a pack for much of the race, as I’m certain I wouldn’t have known where to go at several junctions. If the race continues and I ever make it back out, I would definitely bring a hand-held water bottle, especially if it was as humid as it was this summer. 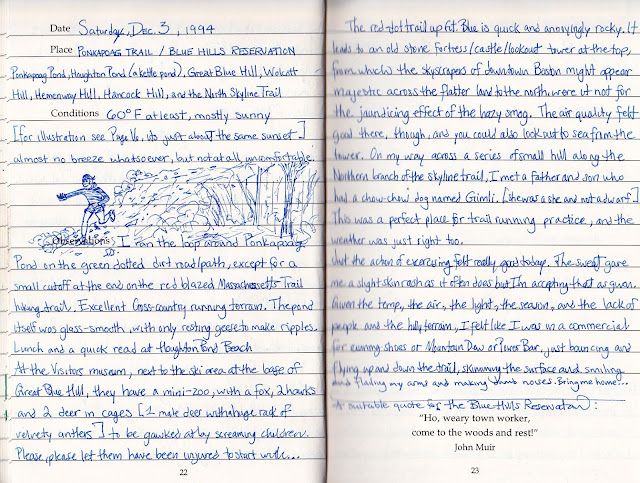 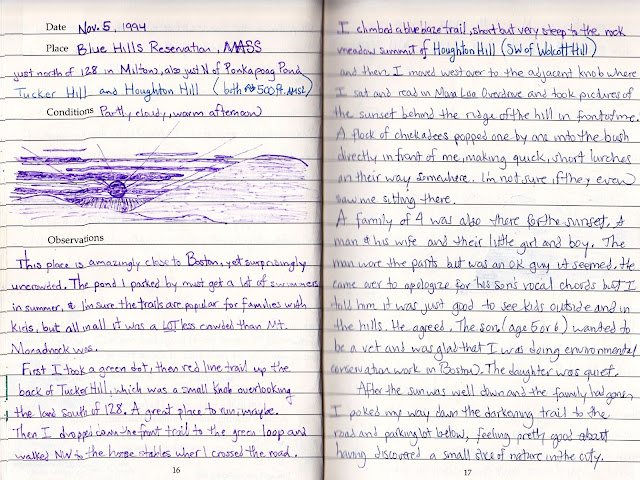