It's always a challenge to keep running through the winter in New England, but it's certainly possible, as many thousands of past Boston Marathoners and local fat ass ultra runners can tell you. You just have to be creative, patient, persistent, resilient, and determined. Sometimes all at the same time.

Aside from just getting out there and running on the roads regardless of the weather (I've accumulated several bins of warm winter clothing over the past 2 decades or so), I also like to mix it up with cross-country skiing, ice skating, and snowshoeing. But sometimes I just find that I really miss being free out on trails, which, at least here in western Massachusetts, are often just ribbons of ice no matter what the snow depth.

And this is where Yaktrax and microspikes come in. When the conditions are right, these studded-snowtires-for-your-shoes can be just awesome little pieces of gear. As was the case yesterday, when Jen and I set out for a four-mile run on the Chapel Brook to DAR Trail (last seen by me here). There was about an inch or two of new snow covering the ground, concealing lots of icy strips and patches where you might have thought there was only bare ground. It was about 30 degrees out, partly to mostly cloudy, and we only saw one other person the whole time. The Yaktrax gave us just the right amount of purchase and traction to enjoy the entire run. 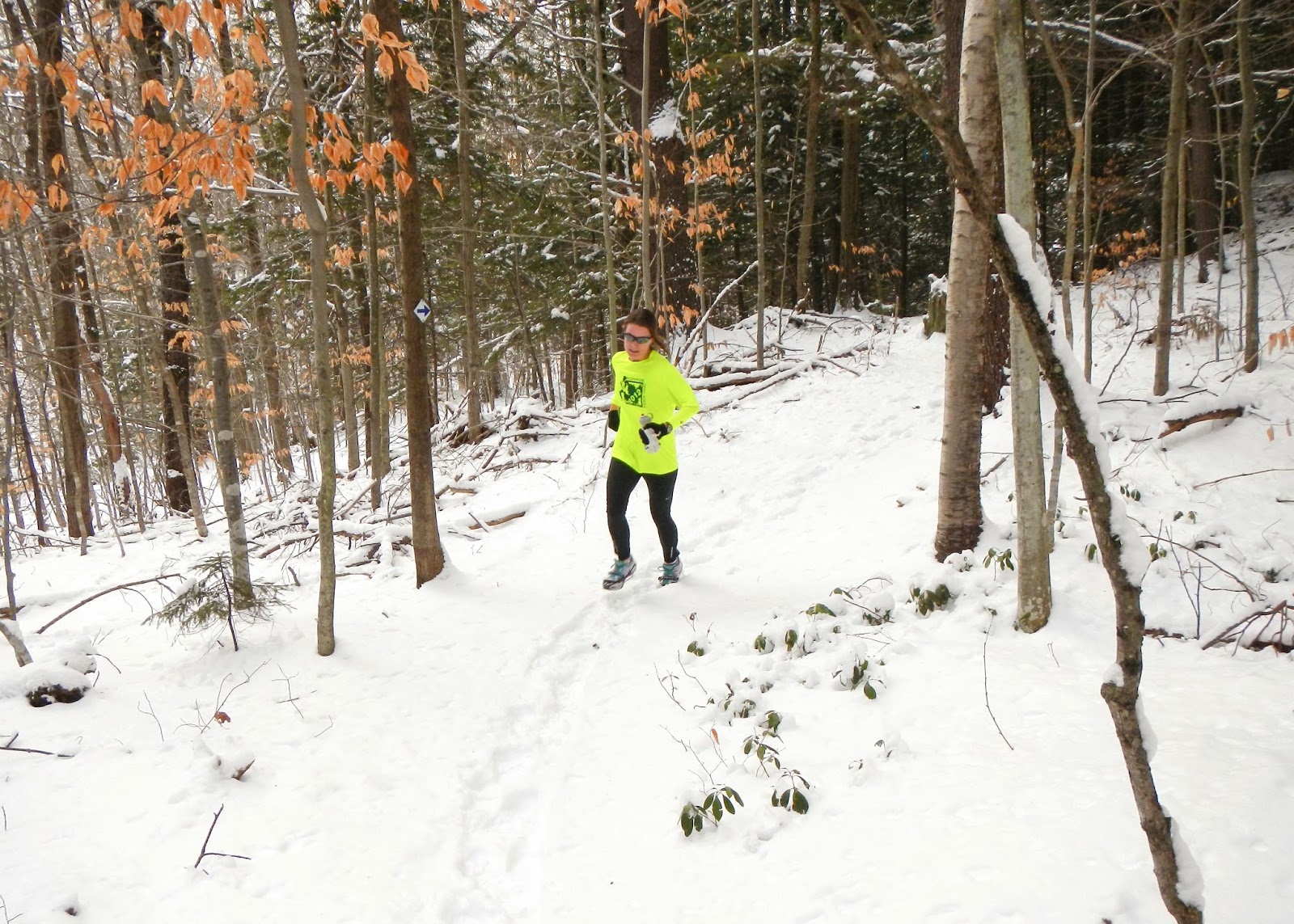 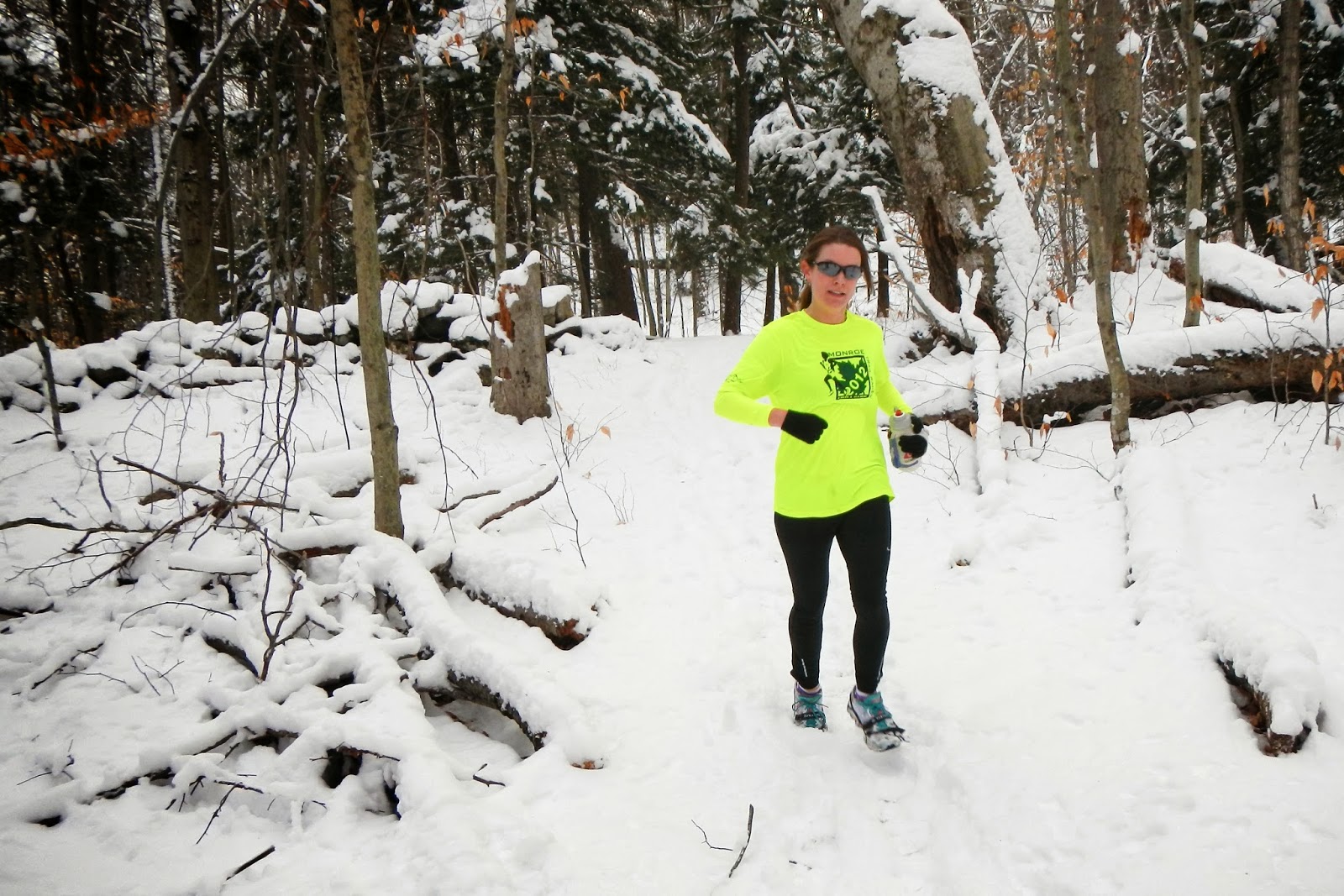 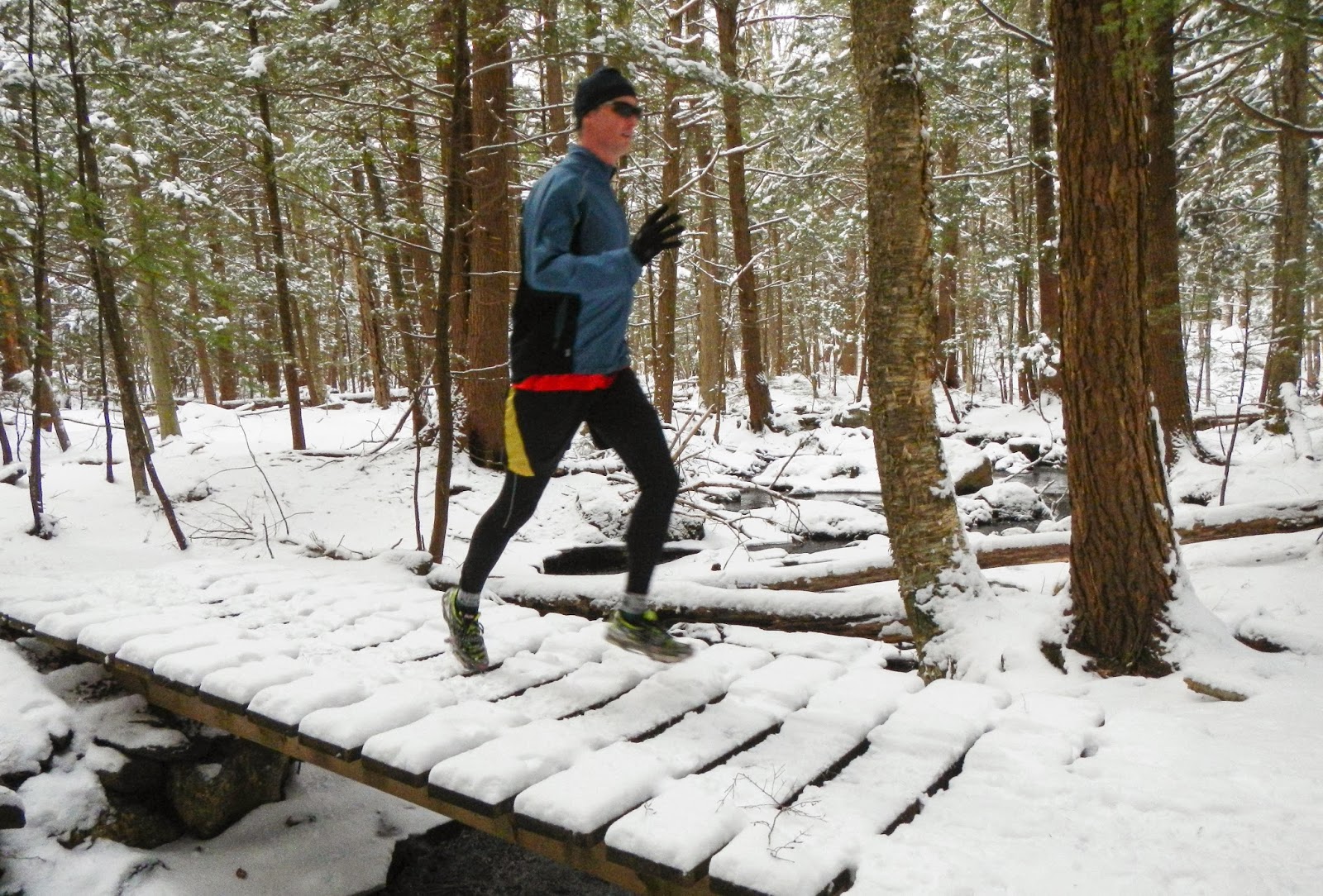 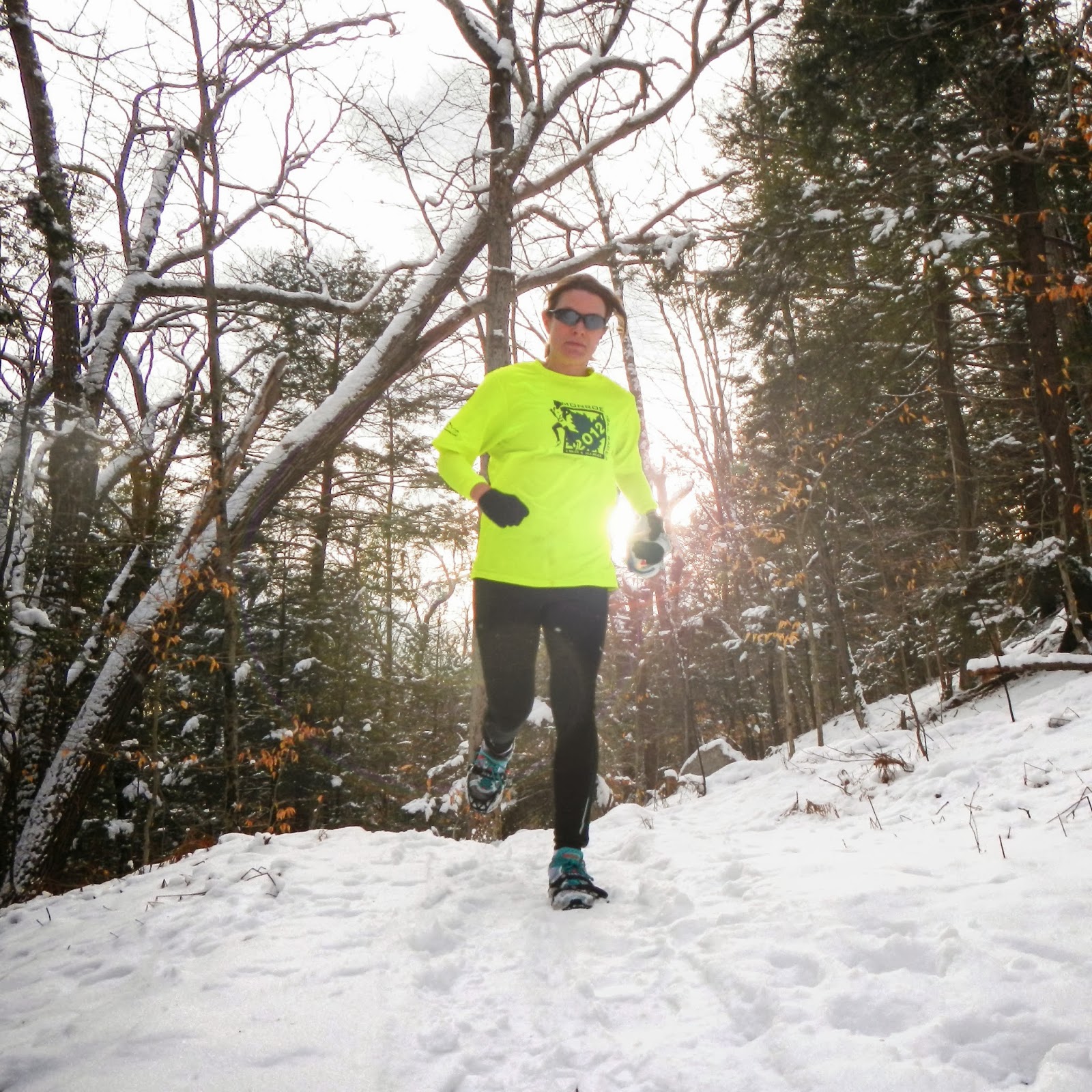 Hear Me Out Here…

Most of these songs were pleasant surprises that popped up in a playlist at some point. A good number are older (from the 80s), but there’s a few from the last decade as well. Many could easily be regarded as, shall we say, embarrassing, but I submit to you that I don't care and that you shouldn't either. So here's my list of recommended songs to run to on your iPod (or other mp3 player). Enjoy!

1. Devil Inside by INXS
This is the best iPod run song, period.

2. Two Hearts by Mat Kearney
This song just rolls along with a steady, snapping beat, and has fairly soaring lyrics and vocals to boot.

3. Between Planets by The Jesus and Mary Chain
Powerfully percussive, snapping drums and snarling vocals, with an awesomely driving guitar solo. An early ‘90s classic (their Head On is also an excellent running song, with strong drums and thrumming guitars; and April Skies is good too).

4. It Can Happen by Yes
A slow-build psyche-song that could border on cheesy if you let it. Don’t let it; it’s a good one.

5. Can’t Stop the World by The Go-Go's
Yup. Them. Trust me, this bouncy song is perfect for picking up the pace and surging on. Try it. Go!

6. In This Home On Ice by Clap Your Hands Say Yeah
The singer’s voice, reminiscent of David Byrne, may not be to everyone’s tastes, but this insistent song maintains its driving beat all the way through.

7. One Last Thing by Angels and Airwaves
Never mind the vaguely religious lyrics at the end (I don’t), and just enjoy the bouncing, rolling, percussive nature of this fast-paced tune (if you can stand the singer’s nasally voice; which I strangely can).

8. Rain in the Summertime by The Alarm
Best listened to on a sweltering summer long run that includes (naturally) a rainshower, this one features a remarkably runnable beat.

9. Going Down to Liverpool by The Bangles
I know, I was surprised too. It’s a simple song, but it’s steady, droning, and pleasant, and the music holds up shockingly well for an early '80s pop tune. Also, the video features Leonard Nimoy, which… yeah. I admit, I honestly laughed at one point (when he cocked an eyebrow in the rear-view mirror).

10. Reach Out by Mike Doughty
More bounciness in the bass, with inspirational lyrics to boot (also check out Sunshine, among others).

Runner-Ups:
1. The Stairs by INXS (one of those slow-build songs that eventually charges full-bore ahead and carries you right along with it)


2. The Adventure by Angels & Airwaves (this was the first song played over the loudspeakers in the warm, pre-dawn light as runners gathered for the start of the 2010 Marine Corps Marathon, and it was perfect for the occasion; it builds for a minute and then becomes a great warm-up song.)


3. To Try for the Sun by Lindsey Buckingham (awesome staccato guitar work)


8. A Real Hero by College (from the soundtrack to the movie Drive)


9. What I Wouldn’t Do by Serena Ryder (snappy pulsing percussion, with upbeat lyrics; plus I just really like the way she delivers the line “hundred different shades of blue”)

10. Little Thoughts by Bloc Party (good for going fairly fast; also notable: So Here We Are and This Modern Love)

Anyway, that’s my list for right now. What about you?? Got any run tune secrets that you care to share? Please throw as many as you like in the comments!

Jen and I spent New Year's at my friend Jason's father's place up at Lake Sunapee in New Hampshire. We arrived mid-day, and immediately set out for a late afternoon snowshoe hike up to Lake Solitude on the west side of Mt. Sunapee. We climbed the 2-mile long Andrew Brook Trail from Mountain Rd, and had the place all to ourselves except for one couple we met on their way down. There were a few inches of fresh snow down below, and up to a foot higher up the trail. We got to the frozen lake just as the setting sun cast that unmistakable coral light on the darkening white world. We ventured out onto the snow-covered ice a little ways, just because we could. It was quite cold, however (about 10°F), and daylight was fading rapidly, so we turned around and descended back to the car (in about half the time it took us to get up). I'm not really a wild drunken party person, and this is pretty much exactly how I wanted to spend my New Year's Evening. 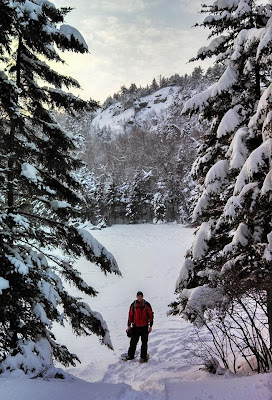 Posted by Ben Kimball at 6:17 PM No comments: