Running Without a Net

We don’t get a lot of opportunities for extreme exposure here in western Massachusetts. Not the way you do up in the White Mountains or out west in the Rockies or Sierras. The magazine covers and clickbait photos featuring runners up on scary-looking escarpments or gliding along the edges of too-technical precipices aren’t exactly our standard geography wheelhouse. BUT, we do occasionally have our moments.

An example: the local trail running community as a whole LOVES Mt. Tom, and the Metacomet-Monadnock (M-M) Trail (also a part of the New England Trail) along the summit ridge in particular. For nearly two miles the trail hugs the western edge of the mountain’s crest, sometimes edging right out to the top of the cliffs. Parts of it allow you to run fast and parts require you to use your hands to scramble up or down steep outcrops. Whether you consider it “fun” or not probably depends a lot on your personal comfort level with heights. But no one would deny it’s dramatic as all get-out. 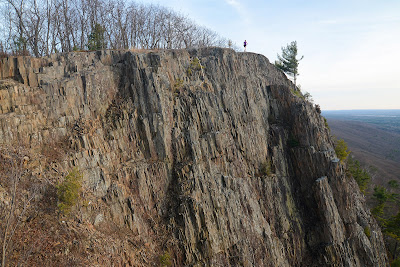 Another obvious example would be the handful of ledges along the Seven Sisters ridge across the river. Most of the route there is quite safe, albeit highly rugged and technical and challenging, but in a few spots the trail flirts with vertigo-inducing drop-offs and steep pitches. A bit further east in the Holyoke Range there’s another ledge near the top of Long Mountain that has a slightly similar feel. 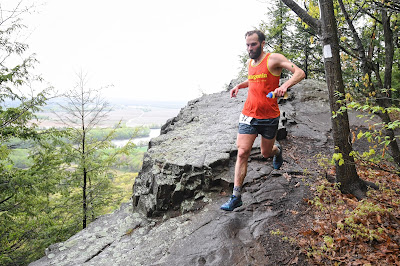 Running right along the edge on Mt. Holyoke

Sometimes the dangerous sections don’t have sweeping views. In an area of Wendell State Forest known as Hidden Valley, an unnamed trail traces along the top of a steep cliff in a fully wooded setting. It’s not like running up the Angel’s Landing Trail in Zion national Park or anything, but the actual feeling is nearly as exhilarating.

Other sites that come to mind where you can briefly court real danger or feel a surge of adrenaline on your run include: a short stretch in the open below the summit of Peaked Mountain in Monson; a thin fin of ridgecrest along the M-M Trail on East Mountain in Holyoke; Sachem Head in Greenfield; Spruce Hill along the Hoosac Ridge Trail in Savoy; “The Ramp” along the NET in Northfield (map); above Farley Ledge in Erving; and the AT on Jug End in Egremont. 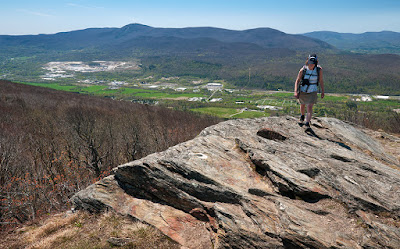 at the summit of Spruce Hill in Savoy (Mt. Greylock across the valley)

Scenic vistas and view ledges are quite common in this area, but actual moments where you get to run along the edge of a high cliff and/or truly experience a thrilling moment where one wrong step could actually make all the difference are rare. My choice? Seek them. Find them. Run ‘em. Live.

Ben is the editor of The Sugarloaf Sun newsletter and author of the guidebook Trail Running Western Massachusetts.
Posted by Ben Kimball at 12:31 PM No comments:

Playing around in the ultra world can skew your sense of scale. I completed my second 50K yesterday (I'm not counting my 9-hour hike at Massanutten in 1996, which I literally did in hiking boots; my feet were pulp afterwards), and I'm calling it a training run. Five or six years ago I might have doubted my ability to even do it, and today I'm downplaying it to the point of absurdity.

The big race I'm currently training for is a 50-miler at Mt. Wachusett on June 10. The schedule I'm using called for running a 50K around this time, so I chose to do Goat Hill in central MA (I photographed at it in 2016; see photo album here).

Since the plan said to run the 50K as a training run (and because I weigh about 15 pounds more than when I did my first 50K in 2013), I chose a goal time of 7 hours, about 45 minutes slower than my first 50K finish time. Given my current conditioning, I think that was a wise goal. I finished this one in 6:58:29, right on target.

Overall, the trails at The Goat were very fun to run (a phrase I use a lot, but when it works it works). There was a wide variety of them, but mostly it was forested, switchbacky mountain bike singletrack. The course consists of four 8-mile loops.  There's a quarter-mile long straight uphill climb at mile 1 that I chose to hike up for the most part, a muddy wet area to cross at mile 2, a super helpful aid station at mile 3, a level to rolling stretch at mile 4, a hyper roller coaster section at mile 5, a long, winding climb at mile 6, a super-fun, swoopy and runnable section with great flow at mile 7, and a fast, tightly twisted section followed by a fast drop to the finish at mile 8.

Loop 1: Felt great. Slightly fast. A bit of discomfort near the end, alleviated by a quick swing by the porta... you know what, never mind.
Loop 2: Still felt good. Similar late-loop discomfort to loop 1 (sigh).
Loop 3: Starting to drag a bit. Hotter out. Sunnier. Rolled an ankle near mile 22.
Loop 4: Jen joined me for this loop. The hill really hurt on this one. 2 miles in; there's a marathon. Lots more walking, and quite a few stumbles. Lifting muscles were DONE. Managed to jog it in the last few miles. 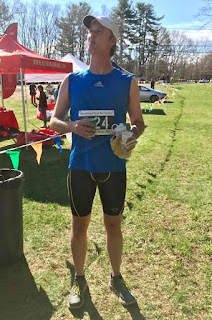 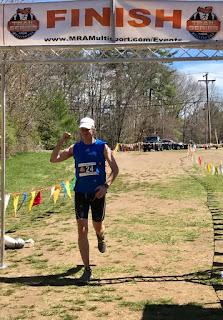 [6/15/17 update]: Well, I wasn't able to do the 50-miler this year after all. I had a biopsy done on a spot on my cheek and it did come back as basal cell so in mid-May I had some Moh's surgery done down in Springfield to have it cut out. The surgeon did a great job but said that to reduce the chance of the scar being permanent I had to do NO EXERCISE for THREE WEEKS. Ugh. Pretty much the crucial final three weeks of training, leading into the taper week. There was just no way I could get and keep my conditioning to where it needed to be on race day (it is a super challenging course). So I dropped for this year; hoping to be back for it in 2018.]

Posted by Ben Kimball at 9:37 PM No comments: