27-Mile Ride in the Hilltowns

In an effort to stay off my aching Achilles for a bit, I've jumped back on the bike and started riding for fitness (and enjoyment) again. Since we moved to Williamsburg nearly two years ago, I've mostly focused on running. At first this was because I was training for my first ultra when we moved, and then because the ultra bug had bit me and my running was going well. Then it was due to the need to be out on trails to research Trail Running Western Massachusetts. But I was pretty heavily into triathlons a few years back, and I like the full-body fitness that comes with the swim/bike/run combo. I've been aware that there's some pretty sweet biking to be had just out the back door, and now I'm finally savoring it.

Today I left home near the center of Williamsburg and climbed steadily up North Road for about 7 miles. It was sunny and 80 degrees out, but the humidity had dropped and there was a nice breeze so it actually felt quite comfortable. The crest is at Ludwig Rd, which leads left into DAR State Forest and other adventures. I continued straight and descended past Chapel Falls, then climbed a bit more on the other side. Then there's a steep mile drop down towards the lower end of Ashfield.

Turning right on Rte. 116, the road got a bit rough in places, and at one point it's closed down to one lane for some major construction just above the South River, but in general the ride is fun as you gradually descend the curves toward Conway.

Just past the covered bridge, I turned right and crossed the river, then climbed Academy Hill on Hill View Rd. As I descended the other side, a bee or wasp flew into my open jersey and stung me. Ouch! Fortunately, the pain quickly subsided as I attacked the last significant climb of the day up Field Hill on Whately Road. Along the recently-paved rolling section between there and the Northampton Reservoirs I tucked down into the aerobars and cruised as much as my not-quite-bike-fit muscles allowed. It got a bit warm as I traversed the open flats approaching Haydenville, and my energy flagged as I made the final gentle climb up Rte. 9 back into Williamsburg, but in general I fared well and it was an all-around very satisfying workout. I know that the Northampton Cycling Club does regular rides more or less along this route, and I'd have to recommend it to anyone else looking for a good hilltown ride on the west side of the valley. 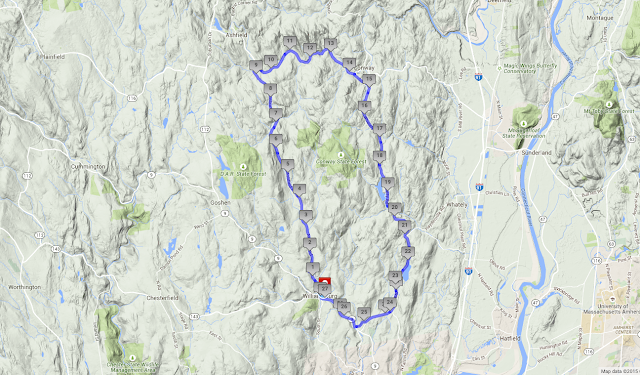 Posted by Ben Kimball at 6:22 PM No comments:

Always seeking opportunities to explore new places in our general region, and being fans of mid-distance trail races, Jen and I came across the West River Trail Run in south-central Vermont. Now in its third year, the 11-mile point-to-point race starts in South Londonderry and heads southeast, mostly following a flat, dirt rail trail, but also incorporating a few miles of rugged singletrack path and short sections of road. It's very scenic, with short but steep hills, a few nearly-hidden waterfalls, sweeping views from atop a high dam, thrilling switchback descent on the east side of the dam, good shade for most of the way, net downhill, and a nice spot to cool off in the river below the finish.

Starting at the old railroad depot along the West River in South Londonderry, you run east on pavement for about fifty feet, after which the road turns to dirt. There are a few small rolling hills here as you pass houses and driveways on the right (keeping the river on your left). About half a mile along, the road ends and becomes the West River Rail Trail. Then it's flat and forested doubletrack trail for the next few miles. Runners began to spread out and find their places along this stretch. I found myself keeping pace with a fellow 413 runner from western Mass who happened to have just moved to South Londonderry. She mentioned to me that she had noticed me stepping on a number of little red newts as we sped over the damp ground, and I resolved to watch my step a bit better after that.

After a few miles we came out into the open at a campground where the route briefly followed a road again and there was a water stop. Then it was back into the woods. By that point I had slowed my pace a bit and was running alone. It was quiet and almost monotonous along the straight rail trail beside the river. Then suddenly the trail veered hard right and took off steeply up the hillside on a much narrower track. It soon leveled off, but the terrain was much more rolling and rugged now. After a fun descent, the trail passed just below a cascading waterfall along a tributary stream.

The singletrack path ended at the access road for a big dam. We passed a water station just below the dam, then headed diagonally up the west face of the dam on the access road. At the top (and northern end) of the dam, the trail crosses over and then begins descending the east face via a series of tight switchbacks and it feels very much like a steep canyon trail out west somewhere, like Zion or Bryce or Yosemite. Below the switchbacks, the trail soon levels out after a brief rugged stretch, crosses Cobb Brook on a pedestrian bridge, and then turns to dirt doubletrack again for the remaining few miles down to the finish at Jamaica State Park. I passed one or two runners along this section, which I have to admit felt pretty nice. 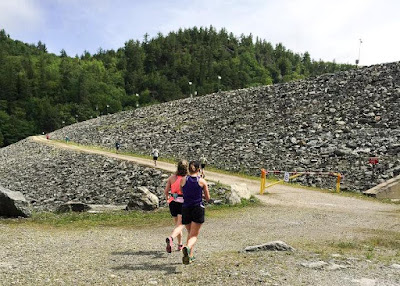 Overall I have to heap praise on this low-key but very fun race. It's well-organized, has a great vibe, and gets you out into some surprisingly wild terrain for this neck of the woods. We're already looking forward to going back again next year. 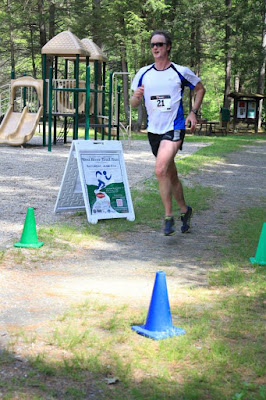 me at the finish