Today I ran the marathon course (2 laps) at the Free to Run Trail Races in Pittsfield State Forest. Hosted by BURCS, this awesome annual event uses some of the toughest, funnest trails in the region, a bunch of which are profiled in site #11 of my guidebook Trail Running Western Massachusetts. I've photographed this race several times in the past (2016, 2015, etc.), but this year I decided I really wanted to step out from behind the lens and get to experience it firsthand, the runner's way.

It was easily the hardest marathon I've ever done. After several weeks of below-average temps, the mercury soared this weekend and the humidity was through the roof. I drove out from Greenfield around 7 a.m., and as I zipped across the hilltowns of the Berkshires to get there I had to use my windshield wipers almost the whole time despite the fact that IT WAS NOT RAINING. The mugginess never let up, and I sweat so many gallons during the course of the very long run.

I shouldn't complain, though. A super-hardy group of ultrarunners, including two incredible women wearing hijab headwear, set off into the pre-dawn fog at 5 a.m. and did a four-lap 50-miler. Those guys were so amazing.

Our race started at 9 a.m. and began with a mile out-and-back along the park road, where most people probably set their fastest pace of the day. Then we climbed about 1,000 feet up the scenic (it's all scenic, so I'll stop saying that) Lulu Brook Trail. Near the top we veered onto the less-steep Wendell Berry Way Trail, then left on the Taconic Crest Trail up to the amazing vista where my friend Jake's family staffed an aid station. Several more miles up and down along the Taconic Crest, past another aid station staffed by another friend, Jen, and then on to the best part of the course. This year the course changed to include the new switchbacks on the Turner Trail, which I LOVE running down. It was so fun to scream down around the tight, well-graded curves. At the bottom of the ridge, we reached an aid station staffed by my friend Ana and then went right back up again, this time via the relentless Parker Brook Trail. At the beaver pond near the top, we turned left on the Pine Hill Trail for one more ambling climb (with one steep pitch just before the end). Then the course dropped down a series of trails (Pine Mtn., Hawthorne, etc.) to the bottom, where we passed one more aid station staffed by friends (Ginger and Christopher) and set out for two final rolling miles of singletrack before the halfway point. Before setting out for lap 2, I changed into a dry top, which stayed not-soaked for almost 20 whole seconds.

Without any warning, I got an agonizing charleyhorse on the inside of my lower right thigh near the top of the Turner Trail switchbacks on the second lap. It forced me to come to a full stop and try to work it out as I watched the angry snakes squirm beneath the skin. It was excruciating. The cramping let up after a few minutes (you can see the short stall on my pace profile just before mile 18) and I was able to descend the mile or so down to the next station. When I got to the bottom I sat in Ana's chair and assessed my situation. I was really afraid of another debilitating and painful muscle seizure way out in the woods up on top of Pine Hill or something. With a mix of realism and subtle encouragement, Ana laid it out for me: You can DNF and that really is fine if that's what your body needs, but of course there's a subset of people who would say do what you need to do and get back out there and try and DO NOT DNF no matter what the cost. She asked me how much salt I'd taken in and I said 6 tabs and she said that seemed sensible given the conditions. But maybe I could stuff some more in? Something clicked and I decided to do it. I scarfed as much salty stuff and sport drink as I could, then dipped a big peeled orange slice in salt and gagged it down. WAY too salty, but apparently what I needed. I set off up the hill and didn't cramp again the whole way.

Despite the crushing mugginess and supercharleyhorse near the top of the Turner Trail switchbacks, I did alright. My pace slowed a lot on the second lap, but I was able to finish in 6:12:37, which was actually faster than the pace that ultrasignup predicted for me, and just a few minutes off my goal pace. 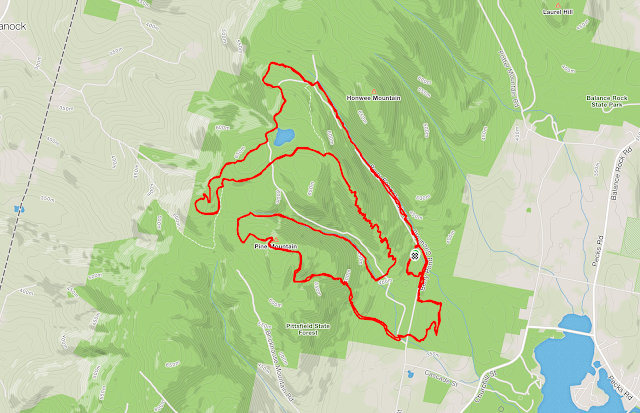 My GPS watch only recorded 24 miles, which seems alarmingly short until you remember that the kind of tight switchbacks that this course follows are notoriously hard to measure when you're zipping along them any faster than a slow walk (never mind that I felt like I was moving that slow a fair bit of this race!).